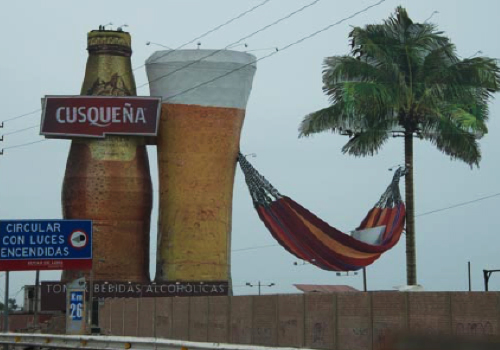 We have visited Peru numerous time in recent years to evaluate companies on our watch list and to carefully underwrite two investments we have made in the country: Corporación Lindley and Backus y Johnston.  In addition to a number of management meetings, facility/plant visits, and company-guided market tours, we have spent considerable time in a variety of supermarkets, large general retailers, and mom-and-pop stores to better understand the consumer, the overall retail landscape, and the positioning of consumer product brands.  Peru has benefited from strong economic growth over the last 25 years, with per capita GDP nearly tripling over this period.  This healthy economic expansion has created a growing middle class.

Having spent a great deal of time on the ground around the world visiting Coca Cola bottlers, we have developed a competency in the overall beverage industry and have established a particular understanding of the dynamics of bottling in various countries and regions.   This background has helped us better understand the operations of both Lindley, Peru’s exclusive Coke bottler, and Backus, Peru’s dominant brewer.

Lindley was founded in the early 1900’s.  The company did not originally bottle Coke products, but joined the Coca-Cola system around the turn of this century; it absorbed the incumbent Coke bottler, Embotelladora Latinoamericana SA, in 2004 and is now the sole bottler in Peru.  The Company has 290,000 points of sale in the country, which is similarly fragmented as many other Latin American regions.  Lindley’s long history as an independent bottler before its original strategic alliance with The Coca-Cola Company in 1999 meant it spent a century creating and marketing its own products and brands, which has led to a unique market share profile for carbonated soft drinks (CSD) in the country.  Peru is one of only two markets in the world where the best-selling CSD for the presiding Coke bottler is not classic/red Coke.  In Peru, the top seller is Inca Kola, which the company launched in 1935 to celebrate the fourth centenary of the founding of the city of Lima.  It is wildly popular in the country — representing 35% of the CSD market — and its brand was ever-present during our travels.

Lindley has built an enormous new facility 45 miles south of central Lima in an area called Pucusana.  The company has invested several hundred million dollars (USD) in the campus, and management is planning to consolidate several other current bottling locations in the new facility.  We drove to the area to tour the facility and get a better feel for the transportation system around the plant.  Lindley does the majority of its volume in greater Lima, and the highway system seems sufficient between the plant and Lima.

This Pucusana facility is located near a summer vacation area called Asia.  Asia beaches and boardwalks are closed outside of the summer season.  Although we visited the area about a month before the main summer season begins in mid-December, we were able to get a sense of the vacation destinations’ popularity by the sheer number of restaurants, bodegas, chicharronerias, and kioskos that lined the road from kilometer 30 through kilometer 100 and beyond.  Lindley has done a good job branding these storefronts with Coca Cola and Inca Kola signage.  Interestingly, these shops and stores were often organized in clusters, with the same-looking signage and an unclear distinction between them, although most seem to be named specifically after their proprietor.

It does not always work better this way, but we prefer to rent a car when visiting new places to give us the flexibility to drive in and around a city or region.  This preference led to an interesting encounter on this particular trip.  On our previously detailed ride to the Asia area, we encountered a traffic stop/roadblock.  We were pulled over for not having our lights on during the day and told there was a fine.  Initially we were informed it was 300 Nuevo Soles (FX rate at the time: 1 Nuevo Sol = $0.34 USD) to pay for it on the spot or 500 Nuevo Soles to pay for it back in Lima, although it was not clear if we could even do so before our flight left town the following day.

We did not have that much in Nuevo Soles so we decided to accept the ticket and let the rental car company sort it out.  Law enforcement clearly wanted us to pay on the spot and told us we could pay $100 in USD, plus 50 Nuevo Soles.  It was clear that this was a very polite shakedown.  After some additional negotiation, we finally settled on $100 which seemed to be an acceptable result for each side.

Backus has made Peru into one of the best beer markets in the world,  thanks to its 95%+ market share and positive associations with the consumer that stretch beyond product acceptance.  Its brand Cristal is in the name of one of the most prominent futbol clubs in the country (Sporting Cristal) and it is often named one of the best places to work in the country.  Its brands are ever-present throughout the country:

Other Observations from Lima

In the larger, more formal grocery stores, we noticed that private labels ranging from ketchup to laundry detergent to bread are very prominent.  This seems to be a growing threat to branded food and beverage companies, although the mom-and-pop market remains strong.  According to several of the companies with whom we met–and despite both the entry of larger retailers like Metro and Falabella and a growing per capita GDP–this more informal channel is increasing in strength.  Part of this outcome is thanks to a move by Credicorp, a large Peruvian bank, to provide financing to mom-and-pops to help expand their stores and add inventory.  Credicorp is also — perhaps most importantly — helping these independent operators offer auxiliary services like paying utility bills, cell phone services, etc.

In Lima, as in many other developing Latin American cities, there has been an influx of population from the countryside–especially the Peruvian highlands– into the city and surrounding areas.  Largely equivalent to favelas in Brazil, Peruvians call this tenement housing invasiones.  There has been significant growth in these areas in recent years, with many of the houses built progressively up the hills that surround Lima (especially on the eastern side of town).  These “villages” have historically been largely ignored by the regional and local government, although they have started providing some basic social services when these areas become large enough.

Construction in some of the less affluent neighborhoods in Lima — better than the ramshackle invasiones, but not as nice as the apartments and brownstone-type structures in neighborhoods like Miraflores — seems to progress as personal savings allow.  In most of these neighborhoods, we noted rebar popping out of weight-bearing walls and columns on the second floor above what would be the roof line.  Often there is no typical roof, less of a problem if you remember that Lima is located in a Pacific costal desert that gets little rain (and average high temperatures vary relatively little throughout the year).  Tenants are typically waiting for availability of funds to complete the next floor of a business or residence.