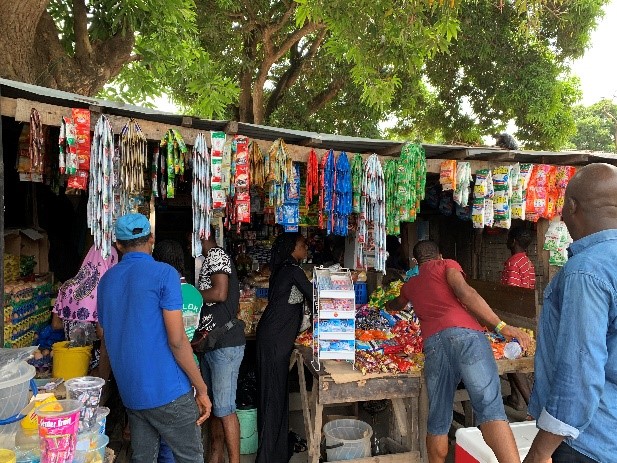 We visited Nigeria because of our desire to better understand the African consumer and because of our particular interest in Nigeria, which the United Nations currently projects will surpass the population of the United States by 2050.  If so, Nigeria would become the world’s third most populous country, after India and China.  The population of sub-Saharan Africa is expected to increase ten-fold from 1960 to 2050, at which point one out of every four people on Earth will live in the region.  Nigeria had fifteen years of great economic growth (on a total GDP and per capita GDP basis) at the beginning of this century, but that trend has broken in recent years.  We continue to follow the country’s progress closely to see if political leadership is able to address systemic issues that would help Nigeria’s economy grow again.

Economies of scale in manufacturing, powerful brands, and the advantages of captive distribution tend to create concentrated oligopolies in the global beer industry.  In many African countries where industry is less developed and on-premise consumption dominates, such advantages are accentuated and market-leading brewers often operate as virtual monopolies.  This has been the case for Heineken’s subsidiary, Nigerian Breweries, for many decades, with Diageo and SABMiller having a small, unprofitable presence.  After acquiring SABMiller business–in large part to gain exposure to fast growing African markets–AB InBev invested to build a new brewery at Sagamu,  just outside Lagos.  In conjunction with the 2018 FIFA World Cup, AB InBev activated the Budweiser brand in Nigeria under its global “Be A King” campaign.  Local reception has been terrific, and Budweiser has become a strong challenger to the Heineken brand, surpassing 20% market share in only a couple of years.  This premium offering is a great complement to AB InBev’s comprehensive value and mainstream portfolios.

Nigeria suffers from a lack of power generation capacity and an inefficient transmission infrastructure because the government does not allow free market pricing for electricity.  This policy is an enormous impediment to the national  industrialization and growth.  Observers estimate that ninety percent of Nigerian industry provides its own power. Manufacturers Association of Nigeria approximates that about 40% of total production cost goes towards power.  While stopping at a supermarket on a morning jog, we experienced this firsthand as the lights were turned off mid-photograph.

Tax evasion is a formidable challenge in Nigeria’s largely informal economy.  With tax revenues as a % of GDP at a mere 6.1% and volatile oil revenues contributing more than a third of this total, Nigeria does not have the necessary funds to invest in infrastructure, education, and healthcare.  Further investment in these initiatives would materially improve the country’s growth prospects.

We visited the new Novare Lekki shopping mall near Lagos, one of the largest shopping malls in Nigeria.  Recently completed in 2016, it was smaller than we expected — 240,000 square feet in total, with 100 stores and 1000 parking spots.  Anchor tenants included grocery store Shoprite (South Africa-listed Shoprite Holdings) and discount retailer Game (South Africa-listed Massmart), but the mall was far from full occupancy.  Retail in Nigeria and Sub-Saharan Africa is dominated by informal trade, which we expect to remain the case until there is a considerable increase in purchasing power.  Many consumers — even the affluent — prefer lower prices and fresher produce offered by street/local vendors.  We observed a few successful retail formats including PEP (South Africa-listed Pepkor), an entry-level clothing retailer with an emphasis on children’s apparel, many consumers’ first experience with formal retail.  We left with the impression that modern retail and its higher cost structure is appropriately penetrated, given the current consumer environment and will not see growth unless there is significant uplift in purchasing power.

Some of our favorite businesses in Nigeria are the local subsidiaries of global multinational FMCG companies Nestle and Unilever.  Both companies have strong brands and distribution platforms in the food and health/personal care (HPC) space.  Nestle Milo nutritional drink and Nescafe, in addition to Unilever’s Knorr stock cubes and Omo detergent, are treasured by local consumers and priced at a premium to competition.  In the recent weak consumer environment, Nestle food-led portfolio has outperformed Unilever HPC-led in both volume and pricing.  If the Nigerian consumer regains his footing and purchasing power increases, profits will increase rapidly for both franchises.

While we struggled to find a diversity of high quality business franchises in Nigeria, two large industries that attracted  our interest were cement and flour mills, both heavily influenced by companies bearing the name of the wealthiest man in Africa, Mr. Aliko Dangote.  The domestic cement industry was created in the 1990’s when the government agreed to impose tariffs on imported cement.  Dangote Cement grew to be the market leader, with more than 60% of domestic capacity, with Lafarge Africa a distant second with a little more than 20% of capacity.  Absent import competition, economies of scale in the cement business can result in a nice business, as evidenced by Dangote Cement 25%+ net margins and 30%+ return on capital in the middle of an economic crisis.  Dangote Cement has used Nigerian profits to expand across Sub-Saharan Africa, which now makes up nearly 40% of volumes but only 11% of profits.  Another important industry to the Nigerian market is flour milling and its associated branded products:  instant noodles, pasta, and semolina (used to make the popular side dish fufu).  These products provide an important source of nutrition for the Nigerian consumer, although brands do not translate into pricing power in these commoditized categories.  While we were in town in April, we witnessed a fascinating event in the industry.  Mr. Dangote announced the sale of Dangote Flour Mills to Singapore Olam International for US$362m.  This transaction mirrors what occurred in 2012,  when South Africa Tiger Brands acquired a 63% Dangote Flour Mills for US$190m (US$300m valuation).  In 2015, three years after the deal, Mr. Dangote repurchased the stake from Tiger Brands for a ceremonial US$1 and Tiger Brands wrote off the entire investment.  Nigeria is an insiders’ market where foreigners should tread very carefully before deploying capital.

While in Lagos, we were fortunate to visit the floor of the Nigerian stock exchange in time for the closing bell.  Once the darling of frontier market investors, average daily USD trading volumes have collapsed from $26m in 2014 to $9m in 2019 as a result of falling oil prices, currency volatility, political uncertainty, and a weak economy.  As the country is religiously split between Islam and Christianity, the stock exchange follows suit by opening the day with a Muslim prayer,  and closing the day with a Christian prayer.