The Mystery of the Missing Goods 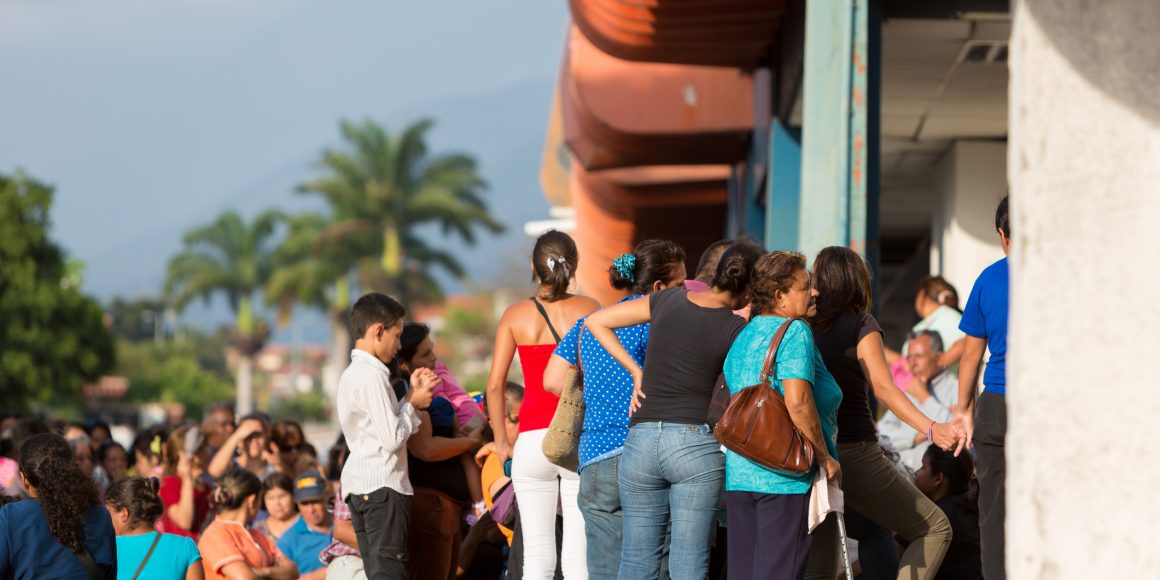 A Brief Introduction to Price Controls:

Consumers see the price of a good as an expense and therefore price increases as a burden. Producers see prices as income and therefore price reductions as a threat. This healthy tension between buyers and sellers, signaled through prices, coordinates economic activity. When the quantity demanded by consumers at a certain price equals the quantity producers are willing to supply at that same price, the market for that good has reached equilibrium. Instead of this optimal result, at various times governments are persuaded to fix prices for the benefit of either consumers or producers. If the price is fixed below the equilibrium price (seemingly to the benefit of consumers), producers will not supply as much product as is demanded– leading to a shortage. When the price is too low to allocate a good to all the willing consumers, alternative methods must be used to decide who gets the good. This apportioning can be achieved through rationing, long lines, lottery, violence, etc. If the price is fixed too high, producers will supply more product than is demanded at that price, and the excess will inefficiently pile up or be wasted.

Venezuelan news accounts are increasingly highlighting the scarcity of basic foodstuffs and hygienic products in the country. The situation, which only continues to deteriorate, is a direct result of a series of government policies that are having dire consequences for the country. Continuing the programs of Hugo Chavez, the current regime, led by Nicolas Maduro, has maintained unsustainable levels of government spending to attract populist political support. The primary source of government revenue is the nationalized oil industry, so as the price of oil has fallen, deficits have exploded. Such fiscal irresponsibility has led to an inflation rate of over 64% per annum. Remarkably, the official exchange rate dictated by Maduro’s government remains unchanged at about 6.3 bolivars to the dollar for most imported goods and transactions. There exist two parallel official markets that supposedly allow certain transactions to occur at 12 or 196 bolivares per dollar, but the amounts allowed to be converted are too little to be useful for commerce. The black market rate, however, is over 272 bolivars to the dollar, meaning the real free-market value of the currency is barely 2% of the government-dictated value.

As the real exchange rate diverges from the artificial government peg, economic actors outside of Venezuela ignore the fake exchange rate and demand US dollars for their goods. Retailers, whose revenues are in depreciated bolivars, must raise prices because of this requirement to pay dollars for their inventory. The government’s response has been to decry profiteering due to these increased prices (ignoring the actual costs of the goods for the retailer) and to impose price controls on basic goods like cooking oil, soap, and toilet paper. With both the capped prices and the artificial exchange rate, goods are required to be sold well below their real cost of procurement. Because they are being forced to lose money on every transaction, these importers simply quit providing the goods. Predictably, shortages have resulted, forcing distraught consumers to queue in multi-hour lines to try to buy– often unsuccessfully– even a small allotted quantity of their everyday necessities. The backlash has been intense, and consumers are nearing revolt. The government’s reaction has been to (i) cast blame on anyone or anything other than its own policies, and (ii) heavily police stores both to make sure price caps and rationing are enforced and to contain any fighting over price-controlled staples. This series of events illustrate how price controls have both destructive first order effects (shortages if too low, surpluses if too high) and equally pernicious higher-order effects (lines, violence, criminalization of formerly normal activities, use of force to impose the policies, etc.). It is instructive to note that shelves in Venezuela remain stocked with televisions, imported cheeses, and many other goods that are neither price controlled at retail nor subject to the 6.3 bolivar per dollar exchange peg. 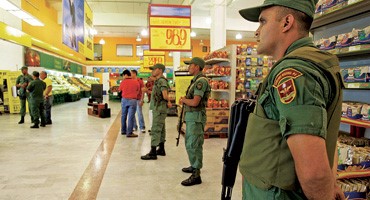 Readers of a certain age will remember living through one of the United States’ attempts at price controls in the not-too-distant past. Gas lines in the 1970’s were a product of our government’s foolish attempt to keep oil “affordable” during the 1970’s OPEC oil embargo. OPEC nations cut production, restricted sales to the United States (and others), and eventually nationalized many private oil businesses. To simplify slightly, the United States government limited the price of oil that had already been discovered. Predictably, this oil was withheld from the market, which led to shortages. The government’s response was to ration the amount of oil (and therefore gasoline) available to the states, even to the point of allowing gas purchases only on certain days based on the last digit of one’s license plate. The government went on to compound its mistakes by making the export of domestic oil illegal, which did not do much to help increase the supply but did turn a previously legal activity into a criminal one that then had to be policed. Not until price controls were removed did the price of gasoline move to its market-clearing level, with shortages vanishing soon thereafter.

Because oil is among the most important goods in the world, having an unfettered, market-clearing price for it is important for the functioning of the global economy. Last summer, most market participants believed oil was correctly priced at around $100/barrel, as it had been trading near that level for several years. Scarcely six months later, oil traded at $45/barrel– and has only recently recovered to $58/barrel We do not know which price is “correct,” but we doubt the ability of any body of “experts” to determine the right price of oiljust as US government representatives failed to get it right during the embargo.

Money is a good that acts as a medium of exchange in transactions as well as a temporary store of value; it is, in fact, arguably the most important good in an economy. Although it may not be natural to think about money in this way, like any other good it has a price, which is expressed in the yield curveinterest rates at each duration. 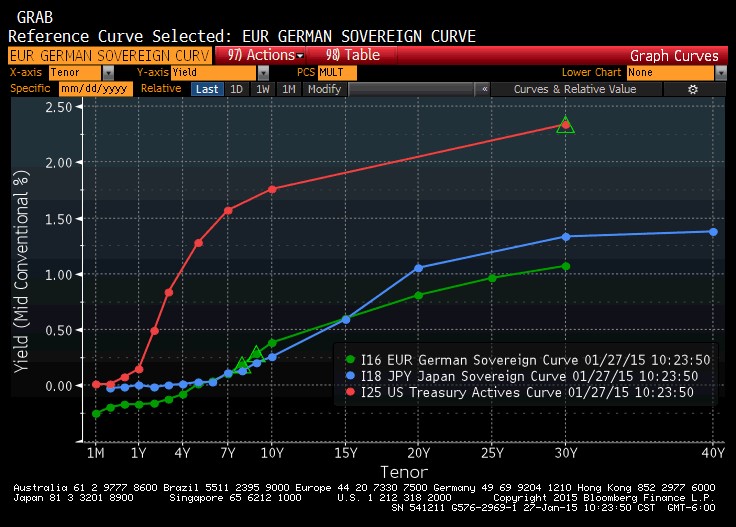 Politicians around the world have a long history of establishing central banks whose primary function is to set the price of money. Using a seemingly everexpanding set of tools, these bankers manipulate interest rates to try to dial in the smooth upward trends they desire to see in their favorite macroeconomic aggregates– employment levels, GDP, inflation, etc. Central banks are generally administered by smart, well-intentioned economists, and we do not presume malice or incompetence on their part. But the job of assessing the correct price for bread, oil, or money at any given time is simply impossible for a committee. Prices are a function of the actions of all market participants responding to their particular set of constraints regarding resources and time preferences for consumption. And these participants continually change their decisions based on their unique opportunity costs. The yield curve in an unfettered market for money is simply a snapshot of the aggregated time preference of these individual actors in an economy. A committee trying to manipulate this curve to fit its preference suffers from two critical shortcomings. One, it lacks the perfect knowledge required to set the equilibrium yield curve. Two, by manipulating the curve, the committee’s choices change the market participants’ behavior in unpredictable ways, which either negates or compounds the manipulation or causes other unintended consequences in the economy. Betraying an underlying hubris in their personal ability to fix the correct price for money, these economists have forgotten Friedrich von Hayek’s observation, “The curious task of economics is to demonstrate to men how little they really know about what they imagine they can design.”

Central bank interventions in the various world markets continue to impact global interest rates, as shown in this updated table of 10-year sovereign bond rates from our last letter:

Through so-called “Quantitative Easing,” a technical euphemism for printing money to fund government expenditures, central banks– especially the Federal Reserve, the European Central Bank, the Bank of England, and Bank of Japan– have freely and aggressively created more than US$7 trillion worth of dollars, euro, pounds, and yen out of thin air to buy up government bonds in their respective currencies. As previously noted, this buying has driven both short-term and long-term interest rates to historic lows, including a series of bond issues being driven to negative prevailing rates. The central banks are setting price controls on the value of money.

Ceteris paribus, if the price of money goes down (i.e. interest rates decline), the opportunity cost for all assets in that currency fall. Consequently, the prices of these assets should appreciate. Note that this decline in interest rates has no effect on the productivity of capital or labor. The market simply moves to reflect the current rate environment and its expectations. Accordingly, the primary effect of current major central bank policy has been to drive financial asset prices to new highs. Future returns from an asset are inversely correlated with the price paid for it, so this induced appreciation has reduced future investment returns.

At some point the disjunction between a positive time preference and negative real rates must be resolved. History suggests that the resolution of this disjunction is likely to be painful, but we offer no expectations about the timing of such a resolution. In addition and perhaps most importantly, the rates of return currently offered by nearly every asset class are inadequate if risk-free, real interest rates revert to positive. Given this dearth of attractive opportunities, our cash position has naturally grown, but we expect to deploy this cash rapidly and profitably when this disjunction is resolved. In the interim, we are unwilling to imperil capital in overvalued securities where rates of return are insufficient for the risks taken. We are grateful that our investors share this preference for doing what makes sense in the long run. It would be much more difficult for us to fulfill our fiduciary duty if we felt pressured to chase short-term performance thereby risking permanent losses of capital.