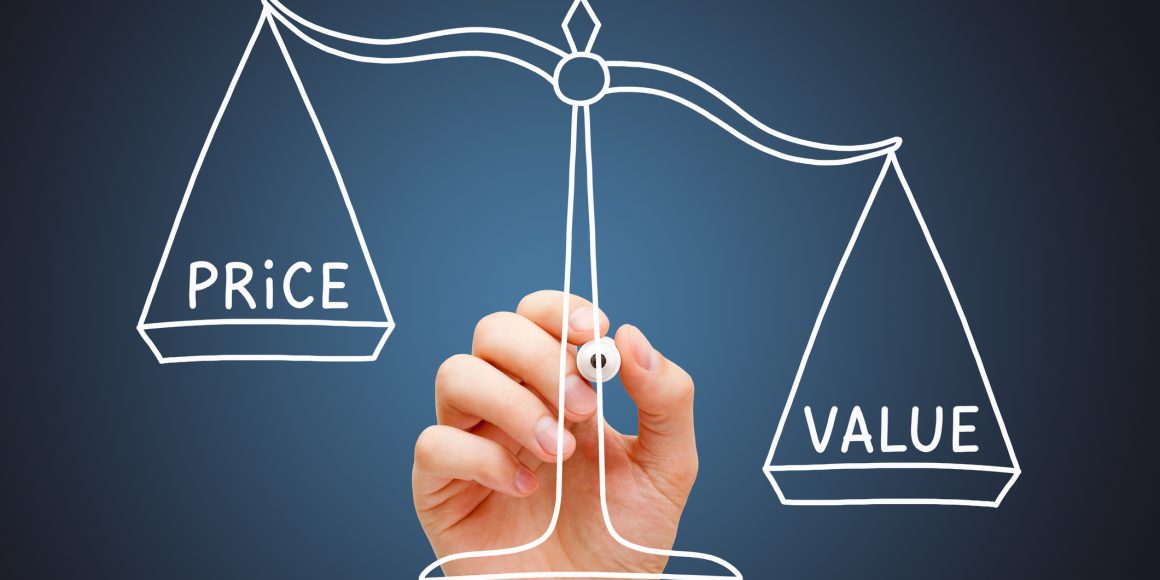 We have written extensively in the past about the centrality of intrinsic value in our investment process.  A company’s stock price can sometimes diverge widely from its intrinsic value, which Ben Graham explained thusly, “In the short run, the market is a voting machine but in the long run it is a weighing machine.”  Our goal is to invest in businesses that meet our investment criteria (Circle of Competence – Business – People) when the market offers temporary discounts (Price) and then to own them until their stock prices converge with their intrinsic values.  This approach raises the question – how do we determine a company’s intrinsic value?

In The Theory of Investment Value, John Burr Williams postulated, “…we shall see fit to define Investment Value, therefore, as the present worth of the future dividends in the case of a stock, or the future coupons and principal in the case of a bond.” [1]  This idea was not original to Williams, but his work certainly raised the consciousness of it in the investment profession.  Mathematically, an investment’s value (i.e. the present value of its future cash flows) is generally expressed as follows:

This concept is easier to understand in the case of a bond, primarily because the amount and timing of the cash flows are known (assuming there is not a default).  Specifically, coupon payments follow a pre-set schedule, and the face value of the instrument is repaid upon maturity.  So the investor is left with a straightforward task – plug in the cash flows, choose a discount (interest) rate that appropriately compensates the investor for the opportunity cost of receiving these cash flows instead of another set of available cash flows, and then solve for present (i.e. intrinsic) value.

Equity investments are not as straightforward for a couple of reasons.  First, as opposed to a bond, the magnitude and timing of cash flows for a stock are unknown and uncertain.  An equity investor must accurately assess these two key aspects of future cash flows to build a reasonable, estimated range of value for a stock.  Second, Williams specified that dividends and not earnings are the source of a stock’s value for its shareholders.  This distinction is important because while an equity owner is theoretically entitled to his proportional share of a company’s profits, he is not necessarily paid these fully or even partially.  In general, management has three options for “excess” cash:  (i) pay a dividend, (ii) reinvest the profits in the expectation of higher future profits (and, by implication, the generation of even greater future dividends), or (iii) buy back stock.  To assume that earnings are equivalent to dividends for valuation purposes, earnings retained in the business (and not paid out as dividends) must either be reinvested at a rate equal to or higher than the prevailing opportunity cost or be used to repurchase its own stock at or below its intrinsic value.  This assumption should not be trivialized as many profit-generating companies have management teams that make suboptimal capital allocation decisions that prevent owners from ever receiving their pro rata share of profits before the businesses expire.

An investor calculating an equity instrument’s intrinsic value should forecast dividends (or, if appropriate, earnings) for as many years as he believes the business will generate them and then discount these cash flows back to today’s dollars.  A company can earn sufficient returns on capital over short or even intermediate-term periods for a variety of reasons, including: starting an unsustainable fad, producing a commodity that temporarily sells meaningfully above the cost of production, innovating a new product that does not have a viable near-term substitute, enjoying a cyclical tailwind in an industry with insufficient capacity, having a cherished brand that creates a true sustainable competitive advantage, etc.  When an investor forecasts the prospects of a business, particularly its more-distant future earnings, he has to decide whether the source of its underlying profitability is maintainable or fleeting.  Looking in the rearview mirror of past financial statements and filings is an important part of our process and is helpful in understanding the core economics of a business.  But alone, it is insufficient for estimating the company’s future prospects.  Durable competitive advantages, which comprise a company’s “moat,” allow an investor to see the future with sufficient accuracy.

Let us look at three different business profiles and use Williams’ model to estimate intrinsic value:

All three companies share the same cash flows in the first five years before their fortunes diverge widely.  As Williams’ math implies, and these examples illustrate, the longer and larger the cash flows that a business produces the more valuable it is:

The Trouble with Terminal Values

In practice, projecting forty years of earnings or dividends is difficult for most businesses.  Accordingly, academics and practitioners have developed a shortcut of applying a terminal value, which is typically done at the end of a string of explicit cash flows over a much shorter period (five to ten years, for example).  This terminal value is intended to act as a proxy for the explicit present value of all future cash flows from that point forward.  A general equation should help clarify how this math works:

Terminal value can be calculated in a variety of ways, and one approach is to apply an earnings multiple to proxy the company’s valuation at that point in time.  Another popular approach is to use the Gordon growth model, which was derived by economists Myron Gordon and Eli Shapiro based on the theoretical underpinnings of Williams’ work in The Theory of Investment Value.  Their formula uses a constant growth rate in perpetuity to calculate the present value of all residual earnings past the last explicitly forecasted cash flow.  To illustrate this idea, let us look at an example that calculates intrinsic value by summing (i) five years of discounted forecasted cash flows and (ii) a terminal value determined using the Gordon growth model: 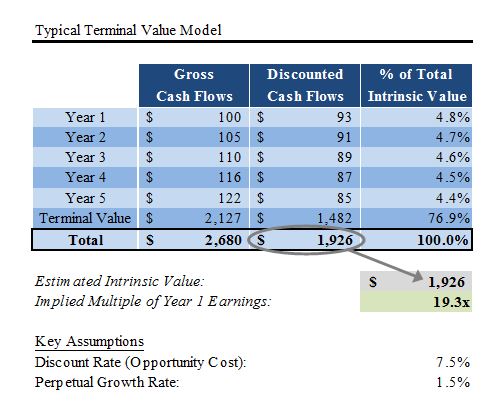 In this model, the next five years of the company’s forecasted earnings comprise less than a quarter of the value of the business, while the present value of cash flows implicitly expected beyond year five (the terminal value) make up over 75% of the total calculated intrinsic value.  As reflected in this example, avoiding explicitly projecting future cash flows predisposes investors to be too optimistic in their forecasts.  Note that all three of our examples could be plugged into this model, and because the projected cash flows for the first five years are identical, an investor could mistakenly derive the same intrinsic value for each business:

We seem to differ from many other market participants because we believe capitalism is more relentless than they expect – that is, we are far more skeptical about the durability of any supposed moat.  Many investors systematically overestimate both the predictability and sustainability of the moats for a large swath of businesses.  The forward P/E multiple for the S&P 500 is currently about 15.  Looking at Company B above, valuing a business at 15 times earnings implies that investors have some sense of what earnings will be 15 years from now.  We do not feel comfortable projecting 2028 earnings for the average S&P company.  We think history has shown that only a few businesses sustain their current profitability for periods that long.

Because of the difficulty of accurately forecasting dividends/earnings even for outstanding businesses with deep, definable moats, it is insufficient simply to discount these cash flows using a market rate and then to purchase the business at or just below the prevailing valuation.  Instead, we require a margin of safety, a substantial discount between a company’s per share intrinsic value and its stock price, before we invest.  As we wrote in previous letters, we are only willing to pay about half of the intrinsic value we calculate for a business, or we use a much higher discount rate as a “hurdle” rate in order to calculate the valuation at which we would be buyers.  Such conservatism is the only way to mitigate losses when we make mistakes in valuation while also providing the opportunity for outsized returns when our estimates are (roughly) correct.