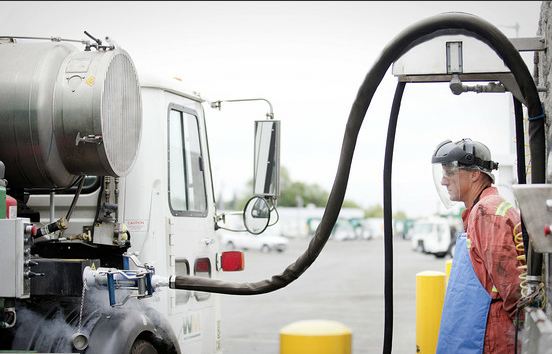 For the past 10 years, various politicians and special interest groups have been calling for an energy revolution that would provide a viable option to oil.  That revolution is happening, and it is natural gas.  The shale windfall — much of which stretches from Texas to Pennsylvania — will help the world for years to come, and we suspect that E&P companies will find a lot of it elsewhere in the world now that they know how to look for it.  This shift will help the U.S. & Mexico have a competitive advantage in energy costs for manufacturing, as well.

Rising diesel costs last year forced Waste Management Inc. to charge customers an extra $169 million, just to keep its garbage trucks fueled.  This year, the nation’s biggest trash hauler has a new defensive strategy: it is buying trucks that will run on cheaper natural gas.  In fact, the company says 80% of the trucks it purchases during the next five years will be fueled by natural gas.  Though the vehicles cost about $30,000 more than conventional diesel models, each will save $27,000-a-year or more in fuel, says Eric Woods, head of fleet logistics for Waste Management.  By 2017, the company expects to burn more natural gas than diesel.

The shale gas revolution, which cut the price of natural gas by about 45% over the past year, already has triggered a shift by the utility industry to natural gas from coal.V  ast amounts of natural gas in shale rock formations have been unlocked by improved drilling techniques, making the fuel cheap and plentiful across the U.S.

Now the shale-gas boom is rippling through transportation.  Never before has the price gap between natural gas and diesel been so large, suddenly making natural-gas-powered trucks an alluring option for company fleets, rather than an impractical idea pushed mainly by natural-gas boosters like T. Boone Pickens, the Texas oilman.  Railroad operators also are being affected as coal shipments decline.

Navistar’s goal is to “expand to a full range of products using natural gas in the next 18 months,” says Eric Tech, president of Navistar’s engine business.  This year, the Illinois company is introducing delivery trucks burning natural gas. Next year, it is adding long-haul trucks with its biggest engines.

Mr. Tech says in a couple of years, one in three Navistar trucks sold will burn natural gas.  “This is not a subsidy-driven market,” Mr. Tech says.  “It’s developing on its own because the economics are compelling.”

Noel Perry, principal at Transport Fundamentals Inc., a trucking research company in Lebanon, Penn., says one disadvantage of natural gas is that it isn’t as dense as diesel.  CNG is only 25% as dense and LNG is 60% as dense. That means trucks need more tanks or bigger tanks to go as far, or they must refuel more often.  That’s not a big deal for city buses or delivery trucks that go back to home base each night, where they can refuel.  But it’s a problem for trucks that drive unpredictable routes or venture out into the hinterland.

Ann Duignan, managing director at J.P. Morgan Equity Research, says “there’s huge excitement” about natural gas but infrastructure immaturity will depress truck sales.  She expects fastest adoption among fleets that can run on CNG and return home each night but is skeptical about long-haul trucking.  “It will be slow, steady, one-fleet-at-a-time type growth,” she says.