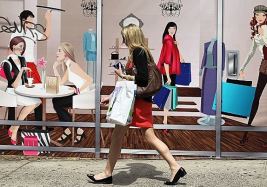 Brick-and-mortar retailers are using customers’ cell phone signals to track their movements and shopping behavior while in stores.  These businesses are using the data in a variety of ways, including improving store layouts and pushing targeted coupons/ads, but the practice has predictably raised privacy concerns.

Like dozens of other brick-and-mortar retailers, Nordstrom wanted to learn more about its customers — how many came through the doors, how many were repeat visitors — the kind of information that e-commerce sites like Amazon have in spades.  So last fall the company started testing new technology that allowed it to track customers’ movements by following the Wi-Fi signals from their smartphones… Nordstrom’s experiment is part of a movement by retailers to gather data about in-store shoppers’ behavior and moods, using video surveillance and signals from their cellphones and apps to learn information as varied as their sex, how many minutes they spend in the candy aisle and how long they look at merchandise before buying it.  All sorts of retailers — including national chains, like Family Dollar, Cabela’s and Mothercare, a British company, and specialty stores like Benetton and Warby Parker — are testing these technologies and using them to decide on matters like changing store layouts and offering customized coupons.

Some consumers wonder how the information is used.  “The creepy thing isn’t the privacy violation, it’s how much they can infer,” said Bradley Voytek, a neuroscientist who had stopped in at Philz Coffee in Berkeley, Calif.  Philz uses technology from Euclid Analytics, of Palo Alto, Calif., the company that worked on the Nordstrom experiment, to measure the signals between a smartphone and a Wi-Fi antenna to count how many people walk by a store and how many enter.

Still, physical retailers argue that they are doing nothing more than what is routinely done online.  “Brick-and-mortar stores have been disadvantaged compared with online retailers, which get people’s digital crumbs,” said Guido Jouret, the head of Cisco’s emerging technologies group, which supplies tracking cameras to stores.  Why, Mr. Jouret asked, should physical stores not “be able to tell if someone who didn’t buy was put off by prices, or was just coming in from the cold?”  The companies that provide this technology offer a wide range of services.

Cameras have become so sophisticated, with sharper lenses and data-processing, that companies can analyze what shoppers are looking at, and even what their mood is.  For example, Realeyes, based in London, which analyzes facial cues for responses to online ads, monitors shoppers’ so-called happiness levels in stores and their reactions at the register.  Synqera, a start-up in St. Petersburg, Russia, is selling software for checkout devices or computers that tailors marketing messages to a customer’s gender, age and mood, measured by facial recognition.  “If you are an angry man of 30, and it is Friday evening, it may offer you a bottle of whiskey,” said Ekaterina Savchenko, the company’s head of marketing.