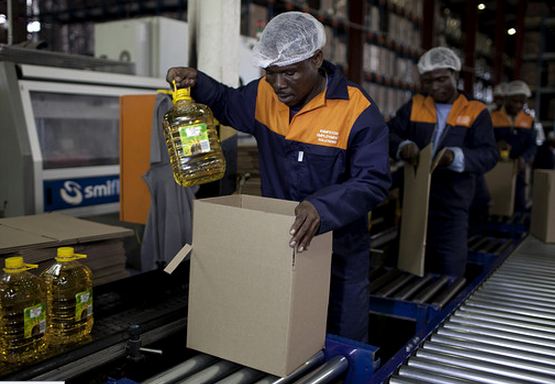 With its acquisition of South African-based Massmart, Wal-Mart is hard at work making inroads on the African continent.  This effort requires the development of a strong base of suppliers:

Six months after the U.S. company won final regulatory approval of its $2.4 billion deal for control of African retail chain Massmart Holdings Ltd., South African suppliers are scurrying to learn the Wal-Mart way.  They are ramping up production, rolling out advertising campaigns and sweating over whether they can sell at discounted prices for extended periods.  Some are even considering to begin night deliveries — long a taboo in a country notorious for car jackings.

A few players dominate South Africa’s retail industries, a legacy of apartheid, when many companies of all sorts pulled out or stayed away under the threat of sanctions. Three domestic chains control about 90% of the supermarket sector.  And South African food suppliers were left to build their own brands while jostling for a share of a relatively small market.  By coming into South Africa, Wal-Mart has set its sights on a bigger market — the entire continent. And South African suppliers see that expansion as their ticket into a wider, even global, market.  “We are desperate not to be left behind,” says Tjaart Kruger, chief executive of Premier Foods Ltd., South Africa’s largest flour producer and one of the Massmart suppliers that is in talks with Wal-Mart.  “If they call, we’re there.”

Getting South Africa right is important for Wal-Mart, too.  With sales growth slowing in the U.S., Wal-Mart is relying more heavily on emerging markets to drive demand; Africa remains one of the few regions untapped by global retailers.  Wealth from substantial natural-resource discoveries has produced a growing middle class of potential new customers — if retailers can tackle a limited infrastructure that challenges cross-border deliveries.