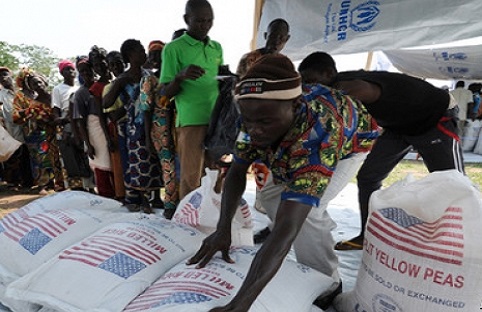 Traditional food aid has historically been focused on physically delivering foodstuffs to places in need.  This approach may be sub-optimal from both a distribution and nutrition perspective, and recent studies suggest that food vouchers may be the most efficient mechanism.

To help minimize the costs of future famines the World Food Programme (WFP) was founded by the United Nations in 1961, as a multilateral institution designed to co-ordinate the distribution of food aid to needy places around the world.  Last year, the WFP helped to feed over 90m people in 80 different countries.  But the way it distributes food relief has been changing.  In the 1960s, the organization’s aid programs for the developing world focused on the distribution of food staples, often bought in developed countries, directly to the poor.  Later, it was discovered that sourcing food more locally tended to be less disruptive to the local economy.  Free distribution of food imported from elsewhere can undercut local food markets and cause more fundamental economic problems to occur.  Buying more of it locally, it was found, tended to help farmers in the region more in the medium term.

Economists now see the next great challenge for the international community as reducing the negative consequences of malnutrition rather than famine.  Just because fewer people around the world are dying of starvation does not mean that what they are eating is good for them, as Lynn Brown, a consultant for the World Bank, points out.  To improve nutrition, the free distribution of food as practiced by the WFP, and the broad subsidy policies of developing countries designed to keep prices low, may not always be the best strategy.  As we recently pointed out in the print edition, the WFP has been experimenting with the greater use of cash benefits and food vouchers.  A new paper by researchers at the International Food Policy Research Institute (IFPRI), a think-tank, suggests that food vouchers and cash benefits can be a cheaper method of relieving poverty than food aid, and boosts nutrition at the same time.

“The authors analyzed the results of an experiment conducted by the World Food Program in Ecuador in 2011, which compared handouts of food, cash and vouchers — all of which were conditional on attending nutrition classes.

The study found that direct handouts — Iran’s new policy — were the least effective option. They cost three times as much as vouchers to boost calorie intake by 15%, and were four times as costly as a way of increasing dietary diversity and quality.  Distribution costs were high, and wastage was also a problem.  Only 63% of the food given away was actually eaten, whereas 83% of the cash was spent on food and 99% of the vouchers were exchanged as intended.  Food transfers have also been the costliest option in similar projects in Yemen, Uganda and Niger, according to John Hoddinott at IFPRI.

In Ecuador there was little difference in cost between handing out cash and food vouchers, the other two options.  But vouchers were better at encouraging people to buy healthier foods because of restrictions on what items could be exchanged for them.  It was 25% cheaper to boost the quality of household nutrition using food vouchers than it was by handing out cash.  A switch from universal subsidies to vouchers could be the most efficient way of boosting health as well as relieving poverty.”