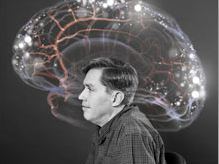 There has been a lot of reporting about the advent of a data boom in which companies — enabled by the web, cheap sensors, and related technologies — are collecting and analyzing mountains of data to enhance their decision making processes in all functional areas of their business.  Jeff Hawkins argues that the half-life usefulness of previously collected data is actually very short, and that in industries of rapid change, real-time data is what really matters for making effective decisions.

Mr. Hawkins, who helped develop the technology in Palm, an early and successful mobile device, is a co-founder of Numenta, a predictive software company.  Numenta’s technology is based on Mr. Hawkins’s theories of how the brain works, a subject he has studied and published on intensively.  Perhaps most important for the technology industry, the product works off streams of real-time information from sensors, not the trillions of bytes of data that companies are amassing.  “It only makes sense to look at old data if you think the world doesn’t change,” said Mr. Hawkins… “Querying databases won’t matter as much, as people worry instead about millions of streams of real-time data.”  In a sensor-rich world of data feeds, he is saying, we will model ourselves more closely on the constant change that is the real world.

Patterns of one or the other are reinforced over time.  As new data streams in, the brain figures out if it is capturing more complexity, which requires either modifying the understanding of the original pattern or splitting it into two patterns, making for new knowledge.  Sometimes, particularly if it not repeated, the data is discarded as irrelevant information.  Thus, over time, sounds become words, words occupy a grammatical structure, and ideas are conveyed.  “The key to artificial intelligence has always been the representation,” he says.  “You and I are streaming data engines.”

Numenta’s product, called Grok, is a cloud-based service that works much the same way.  Grok takes steady feeds of data from things like thermostats, Web clicks, or machinery.  From initially observing the data flow, it begins making guesses about what will happen next.  The more data, the more accurate the predictions become.  It has been much more difficult to engineer than that sounds.  Modeling itself on 40 sensory receptors feeding over 128 information-seeing dendrites on each cell of the brain, Mr. Hawkins put into Grok a mathematical algorithm that he says approximates the way brain cells work together, even sometimes canceling out each other’s signals to refine a sense of what’s going on.