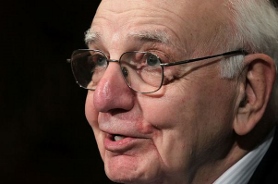 Former Federal Reserve Chairman Paul Volcker recently weighed in on the problems he sees with the existing approach at the Fed.  He specifically dislikes the false precision under which the Fed’s decision makers attempt to conduct their business, which he argues makes their job even more difficult.

Mr. Volcker, 87, weighed in on monetary policy while participating at a conference held at the Federal Reserve Bank of Philadelphia on Thursday.  The former central banker occupies a hallowed place in the institution’s history, having helmed the effort that decisively killed the high inflation that boiled out of the 1970s, albeit by way of creating a sharp economic downturn.  His is a blunt-force approach to central bank policy making stands in sharp relief to the increasingly complex web of communications and tools that have come to define the Ben Bernanke and Janet Yellen eras of central bank leadership.

Mr. Volcker, who believes the Fed’s main goal is to defend the dollar’s stability, said he doesn’t even understand why the Fed adopted a 2% target for inflation.  He asked, “Do we want prices to double every generation?”

Mr. Volcker said that “any price index is an approximation of reality,” and it would be better if the Fed was “fuzzy” about what level of prices it wished to achieve.  What’s more important, he said, is that “you want a situation where people generally expect prices will be stable,” and the Fed appears to have that right now.  That means that in any given month, small gains, or even modest declines, aren’t that big a deal as long as they’re weighed against the general trend.  But with the current inflation target, “you have a feeling now that we are committing suicide” if any inflation gauge turns negative, however briefly, Mr. Volcker said.

Mr. Volcker also said the Fed’s decision to provide long-term forecasts for key economic variables is simply folly.  “The fate of the Federal Reserve can’t depend on the accuracy of the forecasts it makes two years ahead,” he said.  Offering up forecasts with greater frequency and details — the Fed now does this on a quarterly basis — simply demonstrates to the public “more frequently the forecasts aren’t that accurate.”