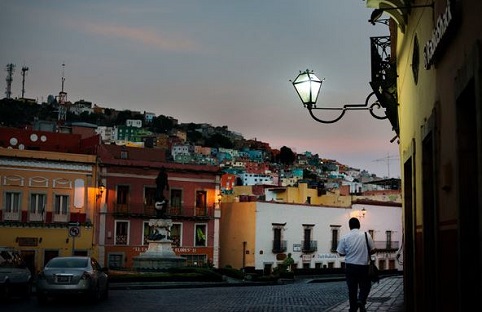 Wage parity with China, proximity to the U.S. market, and a federal government focused on energy and labor reform — among other factors — are providing economic opportunities for Mexico and her citizens.  One key result could be a much larger middle class.

“There’s just a lot more opportunity to study and to succeed,” Mr. Zamora said at the factory, surrounded by robots, steel, glass and young technicians.  “Both my parents are teachers.  They lived in an entirely different era.”  Education.  More sophisticated work.  Higher pay.  This is the development formula Mexico has been seeking for decades.  But after the free-market wave of the 1990s failed to produce much more than low-skilled factory work, Mexico is finally attracting the higher-end industries that experts say could lead to lasting prosperity.  Here, in a mostly poor state long known as one of the country’s main sources of illegal immigrants to the United States, a new Mexico has begun to emerge.

Dozens of foreign companies are investing, filling in new industrial parks along the highways.  Middle-class housing is popping up in former watermelon fields, and new universities are waving in classes of students eager to study engineering, aeronautics and biotechnology, signaling a growing confidence in Mexico’s economic future and what many see as the imported meritocracy of international business.  In a country where connections and corruption are still common tools of enrichment, many people here are beginning to believe they can get ahead through study and hard work.

This is a Mexico far different from the popular American conception: it is neither the grinding, low-skilled assembly work at maquiladoras, the multinational factories near the border, nor the ugliness of drug cartels.  But the question many experts and officials are asking is whether Mexico as a whole can keep up with the rising demand for educated labor — and overcome concerns about crime and corruption — to propel its 112 million people into the club of developed nations.  “We are at something of a turning point,” said Eric Verhoogen, a professor of economics and international affairs at Columbia University.  “The maquila strategy has been revealed not to have been successful, so people are looking around for something new.”

The automotive industry has been Mexico’s brightest spot so far.  In many ways, central Mexico has already surpassed Detroit.  There are now more auto-industry jobs in Mexico than in the entire American Midwest.  At least 100,000 jobs have been added in Mexico since 2010, according to a recent Brookings Institution report, and General Motors, Ford, Chrysler, Honda, Mazda, Nissan, Audi and Volkswagen have all announced expansion plans, with nearly $10 billion to be invested over the next several years, mainly in a 400-mile corridor from Puebla to Aguascalientes.  The work tends to be better paid than what could be found in the area before the companies arrived.  It is still a fraction of the salaries of American workers — many employees on the factory floors in the interior port make around $3.65 an hour — but higher-paid professionals make up about 30 percent of the employees at many auto plants here, roughly twice as much as in the maquiladoras near the border.