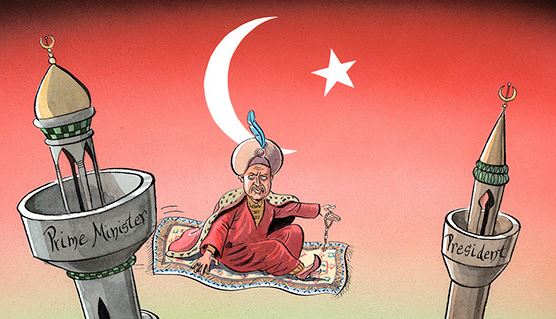 Turkey’s identity as a secular, Western-facing nation-state, as originally conceived and established by Mustafa Kemal Ataturk following the Turkish War of Independence, is being challenged under the leadership of Recep Tayyip Erdogan.

Mr. Erdogan’s enduring popularity since his conservative Justice and Development (AK) party was catapulted to power in 2002 may seem baffling.  A probe, launched in December and targeting his family, cabinet members and business cronies, has thrown up allegations of graft, kickbacks and money-laundering.  Mr. Erdogan denies any wrongdoing…

“There is no mystery to Erdogan’s success,” argues Seyfettin Gursel of Istanbul’s Bahcesehir University.  “It’s because of the economy.”  Over the past decade millions of Turks have been lifted out of poverty.  When the financial crisis hit Europe, Turkey’s economy, fuelled mainly by domestic consumption, kept expanding; growth was over 9% in 2010.  Shiny new hospitals, in which the needy receive free treatment, have bolstered a sense of stability and well-being.

Where Mr. Erdogan’s critics see a tyrant (he has muzzled the press, stacked the judiciary and the security services with loyalists and rewritten laws to suppress the corruption probe), his supporters see a steadying hand.  The former footballer has declawed the army and eased bans on the Islamic-style headscarf.  He was the first to negotiate with the Kurds.  Before winning a third term in 2011, Mr. Erdogan did more than any of his perpetually squabbling, secular-minded predecessors to make Turkey a richer, freer and happier place.

But Mr. Erdogan has become increasingly autocratic.  He is also a master manipulator.  When mass protests erupted last year over government plans to build a shopping mall in Istanbul’s main Taksim Square, Mr. Erdogan convinced his base that these were orchestrated by a cabal of Jews and their allies in the media (including The Economist).  When the graft scandals erupted in December, he blamed them on Fethullah Gulen, a Pennsylvania-based Sunni Muslim cleric who, he claims, is part of a global conspiracy to overthrow AK.  Dozens of alleged Gulenists in the police force have been arrested.

The AK leader’s next goal is to boost the powers of the presidency so that he can continue to rule Turkey from the Cankaya palace.  In a draft bill AK deputies proposed, among other things, that the president be allowed to dissolve parliament and to appoint cabinet ministers.  “These are powers a Latin American dictator couldn’t dream of,” says Riza Turmen, a CHP deputy.