The World In A Box 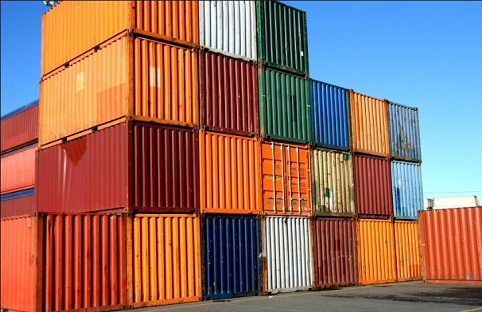 Ignoring the tendency towards hyperbole in some spots, this article makes the case for the humble 20’ x 8’x 8’ shipping container as an engine of global trade.

Standing in its shadow, it’s hard to appreciate just how big the Hong Kong Express is. From stem to stern, it’s 1,200 feet, nearly a quarter of a mile; from side to side it’s 157 feet, about as wide as some mega yachts are long.  Fully loaded, it can carry 13,167 20-foot-long containers, the standard box used in commerce around the world.  Laid end to end, that many boxes — each one containing anything from T-shirts to TVs to truck parts — would stretch for 50 miles. [Note: These ships continue to get bigger.]

Once they enter the stream of global shipping, the boxes are shifted and routed by sophisticated computer systems that determine their arrangement on board and plot the most efficient route to get them from point to point.  The exact placement of each box is a critical part of the equation:  Ships make many stops, and a box scheduled to be unloaded late in the journey can’t be placed above one slated for offloading early.  Imagine a block of 14,000 interlocked Lego bricks — now imagine trying to pull one out from the middle.

The container’s efficiency has proven to be an irresistible economic force.  Last year the world’s container ports moved 560 million 20-foot containers — nearly 1.5 billion tons of cargo altogether. Though commodities like petroleum, steel ore, and coal still move in specially designed bulk cargo ships, more than 90 percent of the rest — everything from clothes to cars to computers — now travels inside shipping containers.  “Reefer” containers, insulated and equipped with cooling units, carry refrigerated cargo and are plugged into power sources on ships or at dockside. Because the containers are all identical, any ship can move them.  Those already huge numbers are expected to grow.  Increasingly, cargo companies are looking for ways to move bulk cargo in containers, fitting the steel boxes with bladders to transport liquid chemicals or cleaning them and using polypropylene liners to move anything from soy, corn, and wheat to salt and sugar.  Even cars and trucks — known in the trade as “RoRo,” or “roll-on, roll-off” cargo — are increasingly being loaded into containers rather than specialized ships.  “Containers are just a lot easier,” says James Rice, deputy director of the Center for Transportation and Logistics at MIT.  “A box is a box. All you need is a vessel, a berth, and a place to put the container on the ground.”

Once shipments became predictable enough to build production and sales schedules around, managers started treating containers like warehouses in motion. By precisely timing the arrival of components, manufacturers could move items from containers directly onto assembly lines or store shelves, bypassing warehouses entirely.  “In the ’80s, people realized the container wasn’t just a box for shipping,” says Muller.  “Containers were no longer about shipping — they became about logistics.”  They may grease the wheels of global commerce, but those millions of anonymous, identical containers also make for a very long, very vulnerable supply chain. Experts like to talk about “resilience” — how well a system can recover when it’s rocked by a disaster or unexpected failure.  Like a precision watch grinding to a halt thanks to a grain of sand, small setbacks can have big consequences.  The American power grid, for example, is notorious for its lack of resilience: A tripped generator in Ohio plunged most of the Eastern seaboard into darkness in 2003, affecting 45 million people.  Could the same thing happen to global shipping?  With the timely arrival of each container dependent on dozens of things going right, there’s a lot that can go wrong. “Right now, we’ve got too many eggs in too few baskets,” says Muller.  In the U.S., two adjacent ports — Los Angeles and Long Beach — handle nearly half of the nation’s container traffic.