The Woman Who Invented Iraq 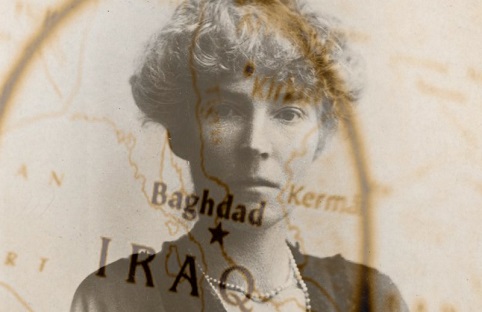 This historical footnote highlights the seeds of future discord that were sown at modern Iraq’s 1920 inception.  Gertrude Bell, a British spy, played a central role in carving up the Middle East immediately following World War I and drawing Iraq’s borders in a way that ignored the long-running conflicts between Sunnis, Shias, and Kurds.

It was a hundred years ago, a few months before the outbreak of World War I.  Baghdad was under a regime loyal to the Ottoman Turks.  The Turkish authorities in Constantinople had reluctantly given the persistent woman permission to embark on her desert odyssey, believing her to be an archaeologist and Arab scholar, as well as being a species of lunatic English explorer that they had seen before.  She was, in fact, a spy and her British masters had told her that if she got into trouble they would disclaim responsibility for her.  Less than 10 years later Gertrude Bell would be back in Baghdad, having rigged an election, installed a king loyal to the British, re-organized the government, and fixed the borders on the map of a new Iraq.  As much as anyone can be, Gertrude Bell could be said to have devised the country that nobody can make work as a country for very long — no more so than now.

The Middle East as we know it was largely the idea of a small coterie of men composed of British scholars, archaeologists, military officers and colonial administrators who were called the Orientalists — this is the “orient” according to the definition first made by the Greeks, meaning everything east of the Mediterranean as Alexander the Great advanced to seize it.

The Ottomans had managed Arabia through a decentralized system of provinces called valyets, run by governors they appointed. Tribal, sectarian and territorial conflicts made it a constantly turbulent place, despite the hammer of Ottoman rule.  Under a more centralized system the place would have been ungovernable.  But the Turks never entertained the Western idea of nation building, it was as much as they could do to keep even a semblance of order.

The Orientalists thought differently.  The Western idea of nation building was the future of Arabia.  As World War I drew to its end and the Ottoman Empire collapsed, the Orientalists saw an opportunity to bring modern coherence to the desert by imposing new kingdoms of their own devising, as long as the kings would be compliant with the strategic interests of the British Empire.

Into this coterie of schemers came two mavericks, both scholars, both fluent Arab speakers, both small in stature and psychologically fragile, both capable of extraordinary feats of desert exploration — a young man called T.E. Lawrence and Gertrude Bell, a more seasoned connoisseur of the desert life.  Both had been recruited before World War I to gather intelligence on the Ottomans.  Both were hard to accommodate within a normal military and diplomatic machine and so ended up working for a clandestine outfit in Cairo called the Arab Bureau, which was more aware of their singular gifts and more tolerant of their habits.

It was inside knowledge like this that put Bell in an influential position when the war ended and the European powers decided how they would carve up Arabia.  Lawrence had committed himself to the princes of the Hashemite tribe, notably Feisal, with whom he had fought against the Turks, and promised Damascus to them.  But unknown to Lawrence, a secret deal had been cut with the French, who wanted control of the eastern Mediterranean and were to get Damascus while Britain would fill the vacuum left by the collapse of the Ottoman Empire by re-drawing the map of Arabia…

In reality, the Iraqi borders had been arbitrarily drawn and disregarded 2,000 years of tribal, sectarian, and nomadic occupation.  The Persian frontier was the only firmly delineated border, asserted by mountains.  Beyond Baghdad the line drawn between Syria, now the property of France, and Iraq was more cartography than anthropology.  Nothing had cooled the innate hostilities of the Shia, in the south, who (in a reversal of the current travesty in Baghdad) were virtually unrepresented in Bell’s new assembly, and the Sunnis to the north, as well as the Kurds, the Armenians and the Turks, each with their own turf.  Lawrence, in fact, had protested that the inclusion of the Kurds was a mistake.  And the desert border in the south was, in Bell’s own words, “as yet undefined.”

The reason for this was Ibn Saud.  Bell wrote in a letter to her father, “I’ve been laying out on the map what I think should be our desert boundaries.”  Eventually that line was settled by the Saudis, whose Wahhabi warriors were the most formidable force in the desert and who foresaw what many other Arabs at the time did: Iraq was a Western construct that defied thousands of years of history, with an alien, puppet king who would not long survive and internal forces that were centrifugal rather than coherent.