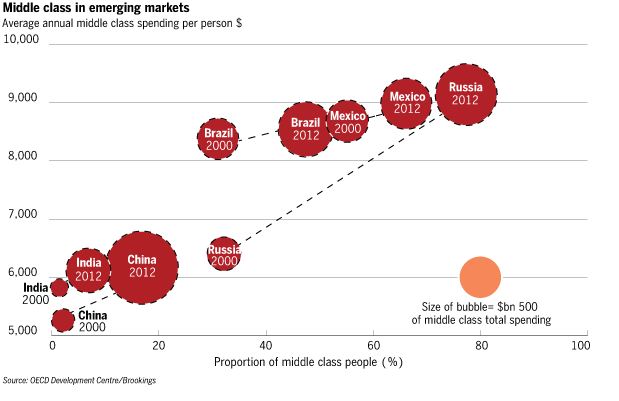 The ongoing emergence of a larger middle class in a variety of countries is changing consumption patterns across the world.  While this chart highlights changes over the past decade, several recent reports outline expectations for the next 10-20+ years.  Multinationals are paying close attention to these trends as they implement their international growth strategies.

We have used data from the OECD and the Brookings Institution which define the middle class as those earning 10 to 100 dollars at purchasing power parity per day.  On this basis, more than half of the globe’s middle class people are forecast to be in the Asia Pacific region in fewer then 10 years, compared to the current proportion of only one in four.

In Mexico too middle class people already form a large proportion of the population, on the OECD’s definition.  Spending is rising slowly but steadily and is forecast to continue on the back of the country’s economic growth.  Its total middle class spending is set to increase by 40 per cent by 2020 compared to 2010, about the same amount it did in the last decade.

In China fewer than one in five people belongs to the middle class; in India just above one in twenty.  Also, average spending within the middle classes is still low, as even those in the group are towards the bottom end of the global scale.

Despite that, with almost $1.5tn of total middle class spending in 2012, China ranks third globally after the U.S. and Japan.  Even at its current slower GDP growth rate, China is set to raise both its headcount of people in the middle class and their average spending over the next decade, resulting in a boom in total middle class spending which is expected to be three times higher in 2020 than in 2010, just below that of the U.S. and above that of Japan… [m]ore than four-fifths of Chinese are estimated to be in an income range that gives them just enough to cover basic needs; but McKinsey predicts that many will graduate to mainstream consumer spending by the start of the next decade, making them able to afford family cars and other luxuries.

India has a small middle class range — nine in ten people are described as deprived by McKinsey.  Despite that, the country has the 14th largest middle class spending power in the world due to the size of its population, a similar scale of overall spending to that of Canada or Spain.  The proportion of deprived people in India is forecast to decline steeply with many entering the middle class group, although at the lower range of the income spectrum.  According to both the OECD and McKinsey, India will have a middle-class-dominated society in the next decade, with the McKinsey forecasting the number of the “consuming class” — individuals with an income above $10 per day — to become over four times larger in 2025 compared to 2010.