The Rise of Five Guys 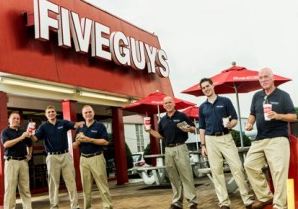 As traditional fast food restaurants have migrated their menu towards healthier offerings, a new slightly ‘upstream’ class of fast casual restaurants have filled the vacuum for consumers desiring higher-fat (read: better tasting) food.  Zaxby’s has been a big success, and Five Guys’ rise is a good family story:

In 1986, as his older boys neared the end of high school, Murrell came up with a proposition: The boys could go to college if they desired, or he could use their education money to start a restaurant.  The idea was that the entire family would pitch in.  Matt says his father’s initial ambition was just to keep the family together.  “His own family wasn’t as close as he would have liked,” he says.  The decision to forgo college was a no-brainer for the kids.  “I was pretty ­excited when the old man said he was starting a business,” says Matt, who is now 43.  “The idea of going to college terrified me.”

For a little less than $70,000 Murrell opened the first Five Guys in Arlington, Va.  “It was in the middle of nowhere, there was no parking and no place for customers to sit and eat,” he says.  The “five guys,” originally, were Murrell and his four boys.  Jim, Matt and Chad all worked in the restaurant, doing everything from cooking to cleaning the bathrooms.  (Ben was too young to work.)  Janie kept the books.  Another son, Tyler, was born in 1987.  From that point on the “five guys” referred to his sons, says Murrell.

As they expanded Murrell was adamant about one thing: The menu had to stay the same.  Just burgers and fries, and good ones.  The burgers were handmade and never frozen.  The hand-cut fries, also never frozen, were sourced from northern climes (“Denser texture,” says Murrell).  “We kept trying to refine what we already did,” he says.  He set his house on fire while trying to figure out how to cook better fries.  There were some brief pokes at adding new items to the menu.  Coffee was a disaster.  “Kids just don’t know how to do coffee right,” Murrell says of his employees.  They tried a chicken sandwich for a week, then pulled it.  “My fear was that we’d add something new and not be good at it, then some reviewer would write about how bad our coffee was and not how good our burgers and fries are,” says ­Murrell.  A hot dog, a veggie sandwich and a grilled cheese sandwich eventually did make it onto the menu.

From the beginning the seven Murrells have made business decisions by a unanimous vote.  To this day the entire family meets every Tuesday at 1 p.m. at the Lorton headquarters to talk business.  The meetings can get boisterous.  “We have soundproofed walls in the meeting room, and my office is on one side and Janie’s is on the other,” says Chad.  “We don’t want the rest of the office hearing us go at it.”

Other “better burger” chains existed before Five Guys.  In-N-Out Burger, a western chain, was founded in the late 1940s.  Fuddruckers started in 1980.  But the revolution started in earnest in the mid-2000s with the rise of Five Guys.  Smashburger soon followed suit and now has 162 units.  Famed New York City restaurateur Danny Meyer founded Shake Shack in 2004, which has 15 restaurants.  Meyer says he doesn’t see Murrell as a competitor but rather as “a friendly restaurant colleague.”  Murrell actually asked Meyer to speak at a Five Guys franchisee convention in 2009, which Meyer says struck people as “odd.”  He went anyway and talked about hospitality.  Says Meyer: “A rising tide lifts all burgers,” perhaps the first time that phrase has ever been uttered.

Click here for more from Forbes
Back to C&B Notes