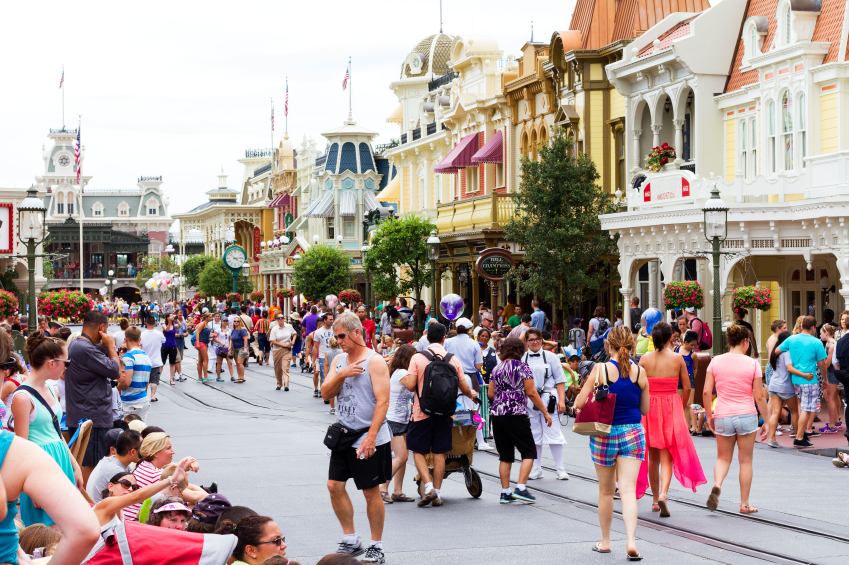 If you have been to Disney World recently, you probably have had some first-hand experience with the new MagicBand.  A $1B+ investment, the bands are reducing “friction” that has always been part of the park experience.  The current nuts-and-bolts of the tool/service, which are already remarkable, appear to only be a sneak peak of how else the technology may transform the customer experience across all of Disney’s properties.

Their MagicBands, tech-studded wristbands available to every visitor to the Magic Kingdom, feature a long-range radio that can transmit more than 40 feet in every direction. The hostess, on her modified iPhone, received a signal when the family was just a few paces away. The kitchen also queued up: Two French onion soups, two roast beef sandwiches! When they sat down, a radio receiver in the table picked up the signals from their MagicBands and triangulated their location using another receiver in the ceiling. The server — as in waitperson, not computer array — knew what they ordered before they even approached the restaurant and knew where they were sitting.

The MagicBands look like simple, stylish rubber wristbands offered in cheery shades of grey, blue, green, pink, yellow, orange and red.  Inside each is an RFID chip and a radio like those in a 2.4-GHz cordless phone.  The wristband has enough battery to last two years.  It may look unpretentious, but the band connects you to a vast and powerful system of sensors within the park.  And yet, when you visit Disney World, the most remarkable thing about the MagicBands is that they don’t feel remarkable at all.  They’re as ubiquitous as sunburns and giant frozen lemonades.  Despite their futuristic intentions, they’re already invisible.

Part of the trick lies in the clever way Disney teaches you to use them — and, by extension, how to use the park.  It begins when you book your ticket online and pick your favorite rides.  Disney’s servers crunch your preferences, then neatly package them into an itinerary calculated to keep the route between stops from being a slog — or a frustrating zig-zag back and forth across the park. Then, in the weeks before your trip, the wristband arrives in the mail, etched with your name — I’m yours, try me on.  For kids, the MagicBand is akin to a Christmas present tucked under the tree, perfumed with the spice of anticipation.  For parents, it’s a modest kind of superpower that wields access to the park.

If you sign up in advance for the so-called “Magical Express,” the MagicBand replaces all of the details and hassles of paper once you touch-down in Orlando.  Express users can board a park-bound shuttle, and check into the hotel.  They don’t have to mind their luggage, because each piece gets tagged at your home airport, so that it can follow you to your hotel, then your room.  Once you arrive at the park, there are no tickets to hand over.  Just tap your MagicBand at the gate and swipe onto the rides you’ve already reserved.  If you’ve opted in on the web, the MagicBand is the only thing you need.   It’s amazing how much friction Disney has engineered away: There’s no need to rent a car or waste time at the baggage carousel.  You don’t need to carry cash, because the MagicBand is linked to your credit card.  You don’t need to wait in long lines.  You don’t even have to go to the trouble of taking out your wallet when your kid grabs a stuffed Olaf, looks up at you, and promises to be good if you’ll just let them have this one thing, please.

This is just what the experience looks like to you, the visitor.  For Disney, the MagicBands, the thousands of sensors they talk with, and the 100 systems linked together to create MyMagicPlus turn the park into a giant computer — streaming real-time data about where guests are, what they’re doing, and what they want.  It’s designed to anticipate your desires.  Which makes it exactly the type of thing Apple, Facebook, and Google are trying to build.  Except Disney World isn’t just an app or a phone — it’s both, wrapped in an idealized vision of life that’s as safely self-contained as a snow globe.  Disney is thus granted permission to explore services that might seem invasive anywhere else.  But then, that’s the trick: Every new experience with technology tends to gently nudge our notions of what we’re comfortable with.

Disney shrouds its creative process in secrecy.  This is both strategic and cultural: The company doesn’t want its magic tainted by the messy realities behind the curtain.  That’s particularly true of the MagicBands.  Piecing together their origin required more than two dozen interviews with executives at Disney and with designers and engineers who worked on the project but could speak only anonymously due to non-disclosure agreements.

Though the team behind this sprawling platform eventually swelled to more than 1,000 people, the idea started years ago with a handful of insiders.  People jokingly called them the Fab Five — an almost sacrilegious reference to Mickey, Minnie, Donald, Goofy and Pluto.  In 2008, Meg Crofton, then president of Walt Disney World Resort, told them to root out all the friction within the Disney World experience.  “We were looking for pain points,” she says.  “What are the barriers to getting into the experience faster?”  The Fab Five were not just Imagineers, the demigods of fun who create Disney’s attractions.  They also included high-level veterans of the company’s sprawling operations division, executives intimately familiar with the gnarly realities of running the park — from catching people trying to scam the ride-reservation system to making sure parents are reunited with lost kids.

But the Fab Five’s workaday roles belied a grand vision for Disney’s future.  “They came back with a drawing of the Magic Kingdom without turnstiles,” Crofton says.  But, she adds, there was a “domino effect in making one decision.  Everything was wound together.”  No one knew this better than John Padgett.  He was the project’s most forceful advocate, and his name appears first on more than a dozen patents associated with MyMagicPlus.  Within the company, this cascade of new technologies, and the dream of overhauling the park, thrilled some and threatened others, who fretted over the sheer complexity of it all.

The Fab Five drew particular inspiration from the then-nascent wearables market.  The possibilities seemed nearly endless.  They were especially intrigued by the Nike SportBand, a FuelBand predecessor that synced with a heart rate monitor and a pedometer in your shoe and fed data to a wrist-mounted display.  Nike was using it in virtual events like the Human Race, a global, virtual 10K run that used wearers’ pedometer data.  What if Disney did something like that, the Fab Five thought. What if a band could be the key that unlocked everything at Disney World?

“We’re just at the beginning of understanding what to do with this,” he says.  What Staggs doesn’t share, but what former team members do, is that Disney already has conceived, designed, and engineered many more features that seem to border on science fiction — features even more ambitious than delivering your food to you without your having to ask.

The MagicBand contains sensors that let guests swipe onto rides and allow Disney to pinpoint their location.  At Be Our Guest, they’re what enable the radios in the table and ceiling to triangulate your location so your server can find you.  If Disney decides to install those sensors throughout the park, a new world of data opens up.  They could have Mickey and Snow White find you.  They might use the park’s myriad cameras to capture candid moments of your family — enjoying rides, meeting Snow White — and stitch them together into a personalized film.  (The product teams called this the Story Engine.)  But they might also know when you’ve waited too long in line and email you a coupon for free ice cream or a pass to another ride.  And with that, they’ll have hooked the white whale of customer service: Turning a negative experience into a positive one.  It recasts your memories of a place — that’s why casinos comp you drinks and shows when you lose at the tables…

Click here for more from Wired.com
Back to C&B Notes