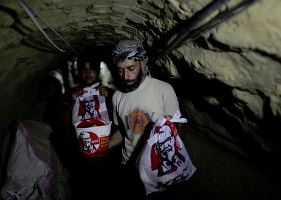 The absence of fast food in Gaza is triggering the human tendency to want something simply because you can’t have it.  Creative entrepreneurs are satisfying the high demand with cross-border deliveries of KFC.  We noted this dynamic last year when Coke showed up in North Korea.

And for fast-food delivery, it is anything but fast: it took more than four hours for the KFC meals to arrive here on a recent afternoon from the franchise where they were cooked in El Arish, Egypt, a journey that involved two taxis, an international border, a smuggling tunnel and a young entrepreneur coordinating it all from a small shop here called Yamama — Arabic for pigeon.  “It’s our right to enjoy that taste the other people all over the world enjoy,” said the entrepreneur, Khalil Efrangi, 31, who started Yamama a few years ago with a fleet of motorbikes ferrying food from Gaza restaurants, the first such delivery service here.

There are no name-brand fast-food franchises on this 140-square-mile coastal strip of 1.7 million Palestinians, where the entry and exit of goods and people remain restricted and the unemployment rate is about 32 percent. Passage into Egypt through the Rafah crossing is limited to about 800 people a day, with men 16 to 40 years old requiring special clearance. Traveling through the Erez crossing into Israel requires a permit and is generally allowed only for medical patients, businessmen and employees of international organizations.

Formerly called Kentucky Fried Chicken, a KFC franchise opened in El Arish, just over Gaza’s southern border, in 2011, and in the West Bank city of Ramallah last year.  That, along with ubiquitous television advertisements for KFC and other fast-food favorites, has given Gazans a hankering for Colonel Sanders’s secret recipe.  So after Mr. Efrangi brought some KFC back from El Arish for friends last month, he was flooded with requests.  A new business was born…

In the past few weeks, Mr. Efrangi has coordinated four deliveries totaling about 100 meals, making about $6 per meal in profit.  He promotes the service on Yamama’s Facebook page, and whenever there is a critical mass of orders — usually 30 — he starts a complicated process of telephone calls, wire transfers and coordination with the Hamas government to get the chicken from there to here.  The other day, after Mr. Efrangi called in 15 orders and wired the payment to the restaurant in El Arish, an Egyptian taxi driver picked up the food.  On the other side of the border, meanwhile, Ramzi al-Nabih, a Palestinian cabdriver, arrived at the Hamas checkpoint in Rafah, where the guards recognized him as “the Kentucky guy.”  From the checkpoint, Mr. Nabih, 26, called his Egyptian counterpart and told him which of the scores of tunnels the Hamas official had cleared for the food delivery.  He first waited near the shaft of the tunnel, but after a while he was lowered on a lift about 30 feet underground and walked halfway down the 650-foot path to meet two Egyptian boys who were pushing the boxes and buckets of food, wrapped in plastic, on a cart.  Mr. Nabih gave the boys about $16.50, and argued with them for a few minutes over a tip.  A half-hour later, the food was loaded into the trunk and on the back seat of his Hyundai taxi, bound for Gaza City.  Back at Yamama, Mr. Efrangi sorted the meals for his motorcyclists to deliver to customers’ doorsteps.  He said he limited the menu to chicken pieces, fries, coleslaw and apple pie because other items could be too complicated.