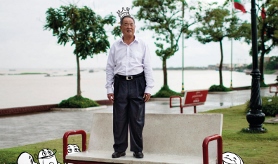 Led initially by Ted Ngoy after his family fled Cambodia in 1975 due to Pol Pot’s communist revolution, Cambodian immigrants have dominated California’s doughnut industry.  Ngoy figured out that the experience of the hot, fresh doughnut was far more important than the look of the storefront, branding, or even an expansive menu.

Though his English was limited and he knew nothing about business, Ngoy crossed the street one evening and asked the two women at the counter how to open a doughnut shop.  They told him it would be risky for someone with no experience and recommended he look into the manager’s training program at Winchell’s, the dominant doughnut chain in California at the time.  Dean gave him a glowing recommendation, and Ngoy became the first in a long line of Indo-Chinese immigrants accepted into the Winchell’s training program.

The curriculum was rigorous. For $500 a month in wages, Ngoy cleaned every inch of the teaching store in La Mirada, handled the money, and baked every doughnut on the menu.  He had no culinary experience and had trouble with the exacting jargon of baking, but he proved a quick study.  When he completed the program, Winchell’s gave him a store to manage in Newport Beach.  He took pride in adhering to the company’s three pillars of success: cleanliness, service, and quality.  He also enjoyed chatting with customers and practicing his English.  They had trouble with his Cambodian name, Bun Tek, so they called him Ted.

One day in 1976, a customer came in with a copy of the Orange County Register.  The man had circled a small ad in the classifieds: Doughnut shop for sale. “Ted, you should buy it,” he said.  The price for the business, a shop called Christy’s Donuts in nearby La Habra, was $45,000.  Ngoy had saved $20,000 working at Winchell’s, and the sellers loaned him the balance.  Just a year after Ngoy arrived in the U.S., he bought a doughnut shop.

He spent a month working as an employee under the old owners to get the hang of things. When he took over, he made just one operational change.  Instead of baking once in the morning, he decided to bake in smaller batches throughout the day.  The doughnuts at Christy’s would always be fresh.  Ngoy kept his job managing the Winchell’s, and Suganthini helped run the new shop.  With two incomes, Ngoy paid off his loan, and the next year he purchased a second shop in Fullerton…

By 1980, Ted Ngoy owned 20 Christy’s shops in Southern California.  Although the locations shared a name, he made no effort to give them a cohesive brand identity.  Scouring classifieds, Ngoy looked for existing shops for sale by owner.  When he found one, he would sit out front in his car for hours, drinking coffee and tallying customers.  He noted foot and car traffic and became deft at estimating a store’s approximate revenue, which helped him during negotiations.  Three decades earlier, William Rosenberg had perfected the same technique while scouting new Dunkin’ locations on the Eastern Seaboard.

Rents on Ngoy’s shops varied, but properties rarely cost more than $300 to $400 per month.  Ngoy locked in good deals with 20-year leases.  After he took over a shop, he ran it himself for one month to assess operating costs and revenues.  He kept the old staff in place and made every effort to maintain the recipes just as they had been.  Americans, he found, didn’t like change.  He did insist on using the highest-quality ingredients, and if a store’s flour wasn’t up to his standards, he would replace it with a superior product.  He also always baked small batches around the clock.

When he had a feel for the economics of a location, Ngoy put word out that a turnkey business was available for lease.  Cambodian families with a built-in labor force of siblings, cousins, aunts, and uncles would come forward.  Christy’s stores operated as independent entities, but owners leveraged their combined purchasing power to keep the cost of ingredients low.  A single shop wouldn’t make anybody rich, but it did offer a reliable way for refugees with limited English and few marketable skills to earn an independent living.

Throughout the early 1980s, Ngoy sponsored visas for hundreds of Cambodians who had fled the chaos back home.  He gave them jobs in his shops, where most tasted their first doughnuts, and set them up as lessees once they got on their feet.  The most ambitious struck out on their own to open new locations and develop new markets, often while continuing to lease a few shops from Ngoy.

Incredibly, Winchell’s, once the dominant brand in the region, started losing ground.  Immigrant families figured out how to survive on a few thousand dollars of profit a month, while large companies like Winchell’s needed substantially higher returns for a location to stay viable.  Ngoy took over a failed Winchell’s location in Santa Ana in the early 1980s, a sort of homecoming to the company that gave him his start.  There, he met a soft-spoken young man named Ning Yen. Like many refugees, Yen had been training with a baker friend after his ESL classes.  Ngoy hired him, and soon Yen became his best employee.  In 1984, Ngoy cosigned a loan enabling his protégé to lease his own shop in Irvine.  “He helped a lot of people like that,” Yen remembers.  “Anything you asked him for, he would help.  He’s a very generous guy.”  Yen would go on to open dozens more shops, as well as a distributorship with Ngoy’s nephew.

By leasing out his holdings, Ngoy kept his day-to-day involvement in the doughnut business to a minimum.  He expanded his empire north, to Brisbane, Fresno, and San Jose.  He and his wife began traveling abroad and spending weekends in Las Vegas, where they gambled a little and saw all of the famous crooners.  Ngoy especially loved blackjack, which challenged his strategic mind.  By the late 1980s, he had more than 50 shops across the state, and money was rolling in.