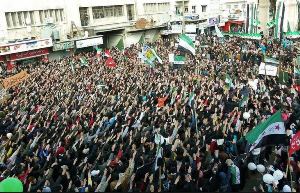 As tensions escalate around Syria’s civil war, Ian Bremmer argues that the combination of indecision and a lack of a coordinated international policy (at least among allies) risks making matters much worse.  The conflict brings into play a series of potentially perilous outcomes.

So as outside powers take sides in the Syrian struggle, and the regime consolidates its military gains, we are getting closer to a Shia-Sunni war that will spill beyond Syria — creating fragmentation in Iraq, threatening the monarchy in Jordan and bringing Israel into direct military confrontation with proximate perceived security threats on an ongoing basis.  International governments understand the risks involved and are likely to push with far more vigor to ensure negotiations occur quickly (with Russia and now China both signing on to direct participation).  But it is too little too late, with no capacity to facilitate a near-term resolution or even a ceasefire — and a growing capacity for missteps that could lead to rapid escalation.

Unless we see a dramatic shift, the trajectory remains clear. The situation will metastasize, and it will force further reluctant and incremental intervention from the U.S. and some members of the EU, mainly the UK and France.  Call it “cautious escalation”, a worst-case scenario where western powers neither cut loose from their obligations nor expand their involvement in a coordinated and efficient manner.

Syria is now the poster child for the G-Zero — a global power vacuum where there is no durable alliance of countries willing and able to set the international agenda.  In just a matter of months, it has become all too clear that the Syrian war, not Iranian nuclear development (despite an expanding nuclear program, as documented by last week’s IAEA report) is the greatest risk factor in the region.