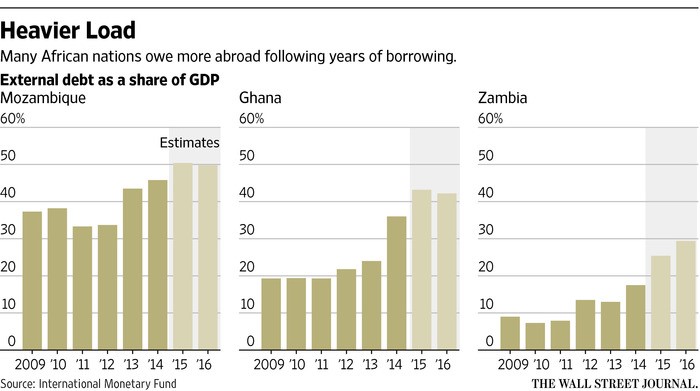 Debt forgiveness without addressing the reasons for the accumulation of the debt (i.e. spending beyond one’s means) mostly just postpones the inevitable.  Economic development in Africa to lift people out of poverty is laudable, but an approach that does not change core structural problems is doomed to fail.

Rock stars helped convince the international community to write off more than $100 billion of African government borrowings a decade ago.   Now the big debts are back, and it’s getting tougher for countries to pay them off.

Mozambique was one of the biggest beneficiaries of debt forgiveness, with its debt slashed from 86% of gross domestic product in 2005 to 9% the next year.  The country has built it back up since then to 61% of GDP.  Ghana’s debt was 82% of GDP in 2005 just before the international community forgave about half of it.  It’s now up to 73% of GDP and growing, according to the International Monetary Fund.  In 2003 terms, its debt stood at $7.5 billion.  The debt level, in today’s dollars, is now nearly $25 billion.

It’s a postscript to the apparent success story that began after a high-profile debt initiative championed by musicians such as Bono helped 35 countries escape crippling obligations to international lenders.  Coupled with the commodities boom, the debt relief helped set off a wave of investment and growth that saw several African economies develop, reduce poverty and integrate with the global economy more than ever before.  But now debt loads are growing again in some countries, thanks to a borrowing spree in the capital markets that has collided with a collapse in local currencies and commodity prices.  In Ghana, for example, the cost of servicing debt will consume nearly 40% of government revenue this year, according to an analysis by Fitch Ratings — twice what is considered sustainable under the rule of thumb used by the IMF and many analysts.

Under the Heavily Indebted Poor Countries initiative and other programs, launched by the IMF and World Bank, Western lenders agreed in the early 2000s to write off much of the debt of several African nations in a process that also demanded governance changes by the countries that applied.  An important goal was getting countries to the point that they could fund development in the capital markets rather than through lenders of last resort such as the IMF.  It worked.  African nations sold about $20 billion in sovereign bonds from 2009 through 2015, in large part to international investors, and most made strides in at least some of their key policy areas related to poverty reduction.

Ghana, an important exporter of oil, cocoa and gold, has issued four eurobonds, raising $3.75 billion, starting with $750 million eight years ago.  But the favorable trends that ushered the country into the market last decade have now reversed.  Ghana’s economy is growing around 3%, down from an average of 8.6% in the last five years, as commodity prices have fallen.  Ghana’s currency, the cedi, has fallen too, down 16% against the dollar since the start of the year.  The country does have the support of an IMF bailout program, which investors see as a guarantor of stability and good policies.  Still, the pressures are again making it harder to raise needed financing.  When Ghana sold a $1 billion, 15-year bond in October, it was forced to pay an interest rate of 10.75%, more than two percentage points higher than what it had paid a year earlier.

Similar dynamics are playing out elsewhere on the continent.  The IMF in October slashed its 2015 growth expectations in sub-Saharan Africa by two percentage points to 3.75% and warned that countries would find it harder to borrow.  The expected rate of growth would be the slowest in six years for the region.