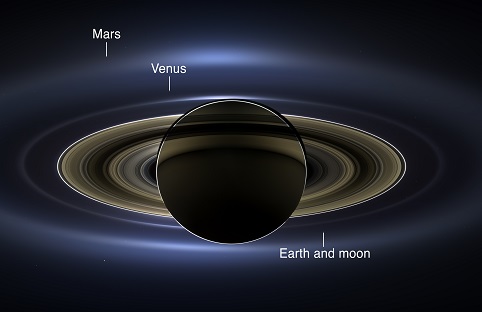 Earlier this week, NASA revealed a composite image of Saturn taken from behind the planet at a time when Venus, Earth, Mars and other celestial bodies were (barely) visible.  The image is actually a mosaic of 141 wide-angle pictures taken in natural color, which mimics how human eyes would see Saturn.

The pictures that make up the mosaic were snapped on July 19, 2013 — the same day that Cassini took advantage of a rare opportunity to photograph Earth without interference from the sun, which was totally eclipsed by Saturn at the time…  Earth can be spotted as a blue dot to the lower right of Saturn, while Venus shines to the upper left of the gas giant.  Mars, visible as a faint red dot, sits above and to the left of Venus.  Beyond inspiring wonder, this new view of Saturn also promises to help scientists study the planet’s rings, which are best observed when light shines behind them, Cassini researchers say.  “This mosaic provides a remarkable amount of high-quality data on Saturn’s diffuse rings, revealing all sorts of intriguing structures we are currently trying to understand,” Matt Hedman, a Cassini participating scientist at the University of Idaho in Moscow, said in a statement.  For example, the photos could shed light on the E-ring, whose icy particles are supplied by geysers erupting from the south pole of Saturn’s moon Enceladus.  Hedman explained that photos suggest there are disturbances in the E ring from diverse sources, including sunlight and the gravity of Enceladus (which is also one of seven moons visible in the image).

Click here for more from Space
Back to C&B Notes