Spain on the Brink? 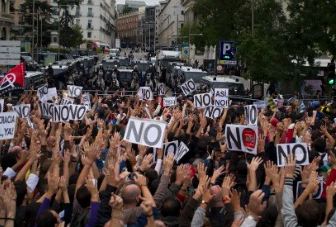 The economic and political conditions that have caused a divide in the Euro — and may ultimately lead to its break-up — are having a similar impact on regional relations in Spain, which have been difficult since the unification of Castile and Aragon in the 15th century.  The country’s history and regional “self-rule” characteristics suggest that a split is not that far-fetched, as the Basques and Catalans in particular have continually struggled for autonomy.

Spain has entered a constitutional crisis.  The decision of Catalonia’s nationalist government to call a snap election in November — which in practice will amount to a referendum on independence — has opened the way to Catalan secession. That decision, in turn, may give a lift to Basque separatists, now running neck and neck with mainstream nationalists in regional government elections due next month, after winning the largest number of Basque Country seats last year in local and general elections.

As a Spain trapped in the eurozone crisis tries to battle its way through a wrenching recession, it must now contemplate the real possibility that its pluri-national state, which replaced the suffocatingly centralist Franco dictatorship with highly devolved regional government, may break up.  The eurozone crisis that has brought down governments across Europe’s periphery now threatens the survival of a nation-state.  The north-south fractures inside the EU are starting to open up within member states.

When the Soviet Union and some of its buffer states broke up at the end of the cold war, EU leaders on the whole regarded this exercise of the democratic right to self-determination as a good thing.  But the idea that separatism could seep into the settled structures of western Europe is wholly alien to them, notwithstanding frequent inter-regional tensions.