A Small Hope Amid the Ruins 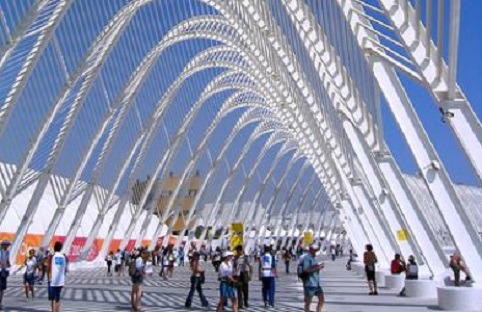 It has been less than 10 years since Athens hosted the Olympics, but the Olympic Stadium Complex built for the 2004 Games has largely been neglected and has fallen into various stages of disrepair.  Bankrupt, inept and corrupt national and local governments have done little to address the issue, but citizens have organized to try to reclaim the development for productive use.

There is something quite touching about the scenes that have been unfolding every day over the past few weeks at the Olympic Stadium Complex (OAKA) in the northern Athenian suburb of Maroussi.  Families, couples, teenagers and lone joggers provide a hint of what this architectural gem revamped by Catalan architect Santiago Calatrava could have been developed into.  OAKA houses the main soccer arena, an indoor basketball arena, a velodrome and tennis courts, among other sporting venues, as well as a vast tract of open space with a number of water features (sadly now out of operation) and a lengthy colonnade.  But since the end of the 2004 Athens Olympic Games the entire complex has been seriously neglected and allowed to fall into disrepair and into the hands of vandals.  Yet the citizens of Athens appear happy to ignore what country they live in and choose OAKA for their leisure time and their Sunday afternoon outings, taking a walk with their children, riding their bicycles or just hanging out with friends.  They pretend not to see the destruction, the graffiti that mars walls and architectural installations that cost millions of euros to create, and the trash that has piled up against dying trees and empty flowerbeds.  This is “their” park, even though successive governments have deprived them of what they ought to have and deserve.

The crowds of people that have been coming to OAKA over the past few weeks may also be attributed to the efforts of a small group of volunteers who started a campaign of Facebook last year where fun group outings to OAKA were combined with cleanup efforts.  Vassilis, a founding member of the campaign named “Let’s Make OAKA Our Own Central Park,” confirms that there has been a big rise in the number of visitors to the park in the past few weeks.

Vassilis had made several attempts to work with the previous management of OAKA, but without result.  “The entire experience was very disappointing,” he says.  “When [former wrestler] Petros Galaktopoulos took over as president of the board in September last year, he came to us on October 28.  There has been nothing since.  To be fair, we didn’t try to make any coordinated effort either and a few months later we became kind of scattered.  I’m hoping that we will get back together, because there’s a lot of work to be done.”

Click here for more from Ekathimerini
Back to C&B Notes