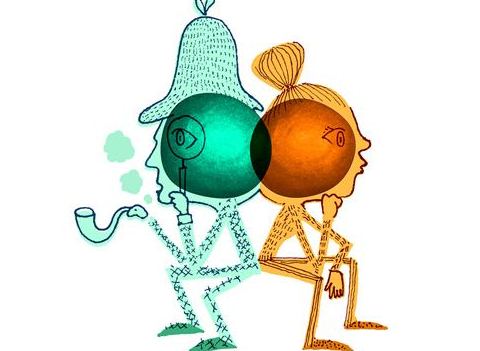 “You see, but you do not observe.” – Sherlock Holmes (to Dr. Watson)

While Sherlock Holmes makes for entertaining theater, Maria Konnikova argues that the sleuth’s observational powers teach a broader lesson about the benefits of mindfulness — which can be more descriptively summarized as “being present in the moment.”

The confluence of seeing and observing is central to the concept of mindfulness, a mental alertness that takes in the present moment to the fullest, that is able to concentrate on its immediate landscape and free itself of any distractions.  Mindfulness allows Holmes to observe those details that most of us don’t even realize we don’t see…

Over the past several decades, researchers have discovered that mindfulness can lead to improvements in physiological well-being and emotional regulation. It can also strengthen connectivity in the brain, specifically in a network of the posterior cingulate cortex, the adjacent precuneus, and the medial prefrontal cortex that maintains activity when the brain is resting. Mindfulness can even enhance our levels of wisdom, both in terms of dialectism (being cognizant of change and contradictions in the world) and intellectual humility (knowing your own limitations).  What’s more, mindfulness can lead to improved problem solving, enhanced imagination, and better decision making.  It can even be a weapon against one of the most disturbing limitations that our attention is up against: inattentional blindness.

When inattentional blindness (sometimes referred to as attentional blindness) strikes, our focus on one particular element in a scene or situation or problem causes the other elements to literally disappear.  Images that hit our retina are not then processed by our brain but instead dissolve into the who-knows-where, so that we have no conscious experience of having ever been exposed to them to begin with.  The phenomenon was made famous by Daniel Simons and Christopher Chabris: In their provocative study, students repeatedly failed to see a person in a gorilla suit who walked onto a basketball court midgame, pounded his chest, and walked off.

As Daniel Gilbert discovered after tracking thousands of participants in real time, a mind that is wandering away from the present moment is a mind that isn’t happy.  He developed an iPhone app that would prompt subjects to answer questions on what they were currently doing and what they were thinking about at various points in the day.  In 46.9 percent of samples Gilbert and his colleagues collected, people were not thinking about whatever it was they were doing — even if what they were doing was actually quite pleasant, like listening to music or playing a game.  And their happiness? The more their minds wandered, the less happy they were — regardless of the activity.  As Gilbert put it in a paper in Science, “The ability to think about what is not happening is a cognitive achievement that comes at an emotional cost.”

Click here for more from Slate.com
Back to C&B Notes