Bad balance sheets and diminishing access to credit are adding to the woes of U.S. major retail franchises.  Will the retailers left standing at the end of all of this be able to translate diminished competition into greater profits?

The reason isn’t as simple as Amazon.com, Inc., taking market share or twenty-somethings spending more on experiences than things. The root cause is that many of these long-standing chains are overloaded with debt — often from leveraged buyouts led by private equity firms. There are billions in borrowings on the balance sheets of troubled retailers, and sustaining that load is only going to become harder — even for healthy chains.

The debt coming due, along with America’s over-stored suburbs and the continued gains of online shopping, has all the makings of a disaster.  The spillover will likely flow far and wide across the U.S. economy.  There will be displaced low-income workers, shrinking local tax bases and investor losses on stocks, bonds and real estate. If today is considered a retail apocalypse, then what’s coming next could truly be scary.

Until this year, struggling retailers have largely been able to avoid bankruptcy by refinancing to buy more time.  But the market has shifted, with the negative view on retail pushing investors to reconsider lending to them.  Toys “R” Us, Inc., served as an early sign of what might lie ahead. It surprised investors in September by filing for bankruptcy — the third-largest retail bankruptcy in U.S. history — after struggling to refinance just $400 million of its $5 billion in debt. And its results were mostly stable, with profitability increasing amid a small drop in sales. 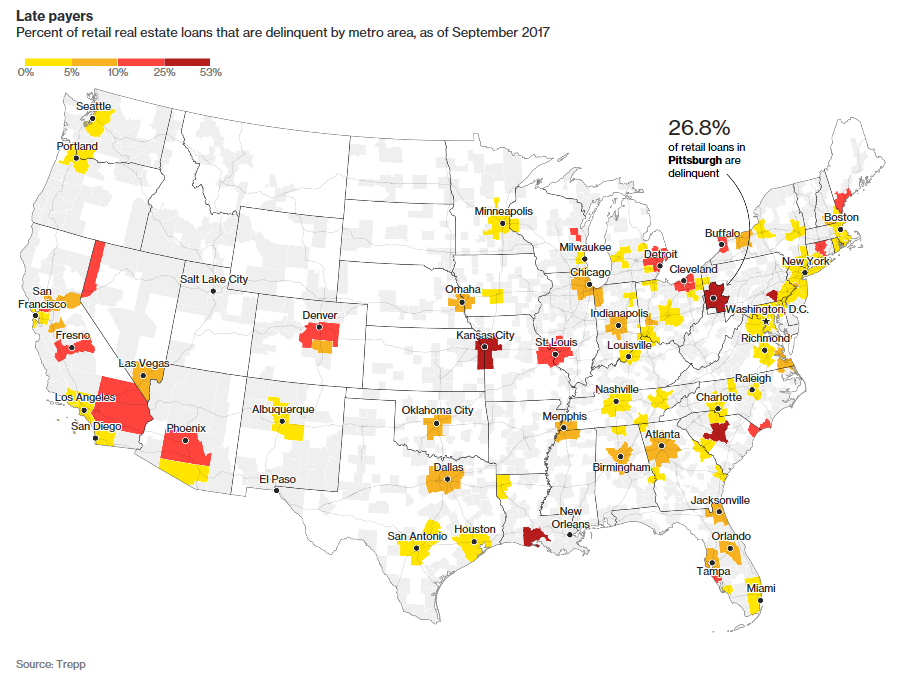 The ripple effect could also be a direct hit to the industry that is the largest employer of Americans at the low end of the income scale.  The most recent government statistics show that salespeople and cashiers in the industry total 8 million.  During the height of the financial crisis, store workers felt the brunt of the pain when 1.2 million jobs disappeared, or one in seven of all the positions lost from 2008 to 2009, according to the Department of Labor.  Since the crisis, employment has been increasing, including in the retail industry, but that correlation ended as jobs at stores sank by 101,000 this year.  The drop coincides with a rapid acceleration in store closings as bankruptcies surge and many of the nation’s largest retailers, including Wal-Mart Stores, Inc., and Target Corp., have decided that they have too much space.  Even before the e-commerce boom, the U.S. was considered over-stored — the result of investors pouring money into commercial real estate decades earlier as the suburbs boomed. 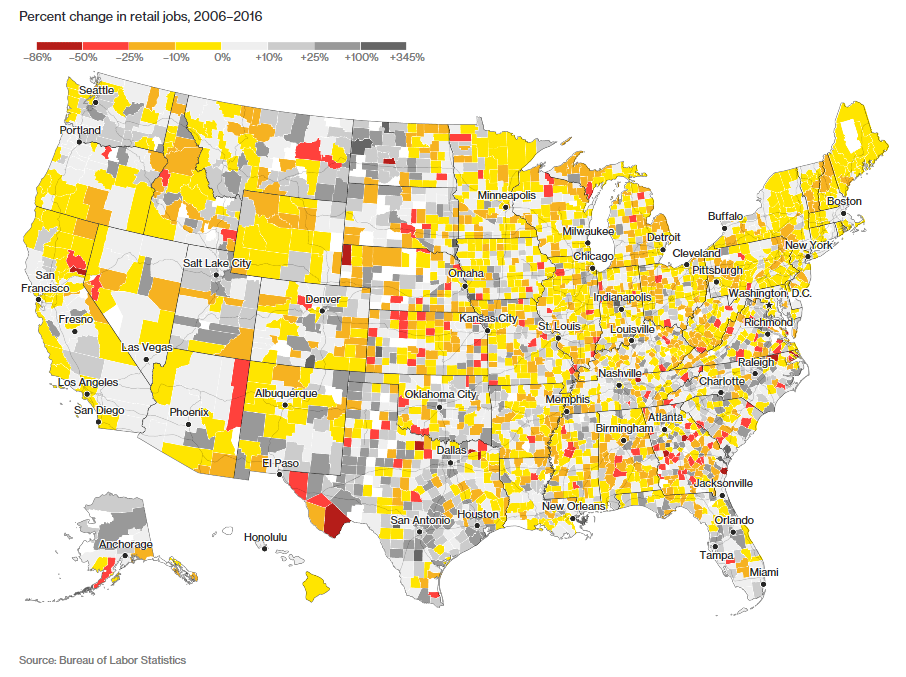