Pot Bellies as a Signal 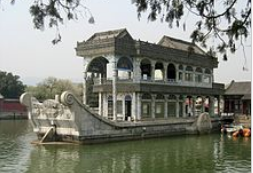 Excesses of the ruling class, particularly personal enrichment at the expense of the body politic, are unsustainable long-term.  China’s leadership change highlights the country’s challenges and the areas of the government that need reform.

In a tranquil lake in the centre of Beijing’s ancient Summer Palace floats a pleasure boat made entirely of marble that remains the most potent symbol of corruption and decay in the last imperial Chinese dynasty. The Qing empire was overthrown after 267 years in power by a republican revolution in 1911 three years after the death of Cixi, the empress dowager who diverted money earmarked for the navy to pay for her marble boat.

The Communist Party of China will unveil its latest crop of leaders on Thursday and they will reign for the next decade under a governing structure that remains strikingly similar to the Leninist model it imported from the Soviet Union more than 60 years ago.  At this time of transition, many in China are inevitably searching for  — and finding signs of — dynastic decay in the rigid rule of the party.  The modern equivalent of the marble boat can be seen in the walled communities of opulent villas on Beijing’s outskirts where the extraordinarily wealthy generals of the People’s Liberation Army and their families park their  Bentleys and count their fortunes.  Some western diplomats estimate that as much as 40 per cent of China’s military budget is siphoned off through corruption.  As a phalanx of senior PLA officers ascended the steps of the Great Hall of the People in Tiananmen Square this week, many of them sported generous pot bellies, leading one party member to comment wryly to the Financial Times that nothing displays structural weakness like overweight generals.

But perhaps the most telling fact is the enthusiasm among upper-class Chinese for procuring foreign passports, property and bank accounts and how willing they seem to be to get out of a system that has benefited them so well. The fact that incoming president Xi Jinping, like many of his contemporaries, has sent his daughter to the U.S. (to Harvard) to study is just one more powerful symbol of elite uncertainty and mistrust of the system.