Patience as a Precursor to Prosperity

In GMO’s most recent quarterly letter, Ben Inker revisited his and the firm’s experience leading up to and following the bursting of the internet bubble in the early 2000’s.  Inker notes that the current extremes are the greatest since the early 2000’s.

The years leading up to the 2000 stock market bubble were extraordinary and unprecedented. They caused unique pain to the portfolios of valuation-driven investors.  The valuation extremes, though, created the greatest opportunity set for valuation-driven investors since the Great Depression.  While the events of the last decade have not been as striking as those of the late 1990s, the recent cycle has gone on for significantly longer and the pain caused to our portfolios has begun to approach 1990’s levels.  As the current cycle has ground on slowly but surely, the valuation extremes have moved wider, creating an opportunity set for valuation-driven investors that looks as extraordinary as what we saw 20 years ago…

In the run-up to 2000, the forecasts for both portfolios got better and better relative to their benchmarks, driven largely by the extraordinary discount of value stocks in the late 1990s.  As the Internet bubble burst and valuation disparities normalized, our portfolios delivered extraordinary outperformance and the superiority of our portfolios based on our own forecasts slowly waned.  In the 2000 case, the poor prior performance set the stage for better times for our portfolios, which was appropriately reflected in the forecasts we were seeing at the time.

What about this time around? Exhibit 5 updates the expected return charts through August 2019. 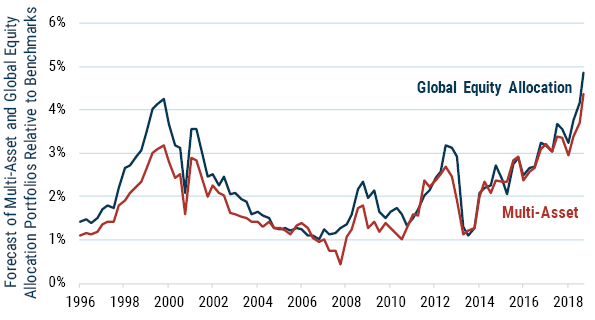 Source: GMO; Forecasts are the “Mean Reversion” forecasts published by GMO at the time.

For both the global equity portfolio and the multi-asset class portfolio, things appear to be even better than they were in 2000.  On the face of it, our portfolios have never had a better opportunity set than they have today, at least relative to traditional portfolios.  How can that be, when the value opportunity was better in 2000?  Part of the reason is that other asset allocation opportunities beyond the value style are even better than they were then.  Table 1 shows the percentile rank of the valuation spread for regional stock valuations and style valuations.

As of 8/31/19 | Source: GMO; Valuation spreads are calculated on an average of several capital proxies.

In both the U.S. and EAFE markets, 1999 was a more extreme value opportunity.  Not only were both spreads into the 99th percentile, but the only data points more extreme were the months immediately surrounding December 1999. But EAFE and emerging are both significantly cheaper relative to the U.S. today than they were back then.  And while value is not quite as well-positioned in the developed world, it is slightly better-positioned in emerging than it was then.