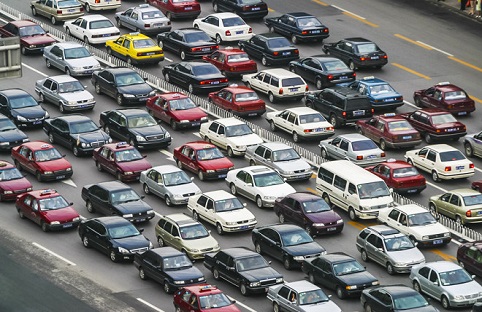 Analogous to Parkinson’s Law, which asserts that work expands so as to fill the time available for its completion, it appears that traffic grows to fill any incremental road expansions.  As Europe, Singapore, and others have demonstrated, a much more effective way to reduce congestion is not to widen roads but rather to price discriminate based on peak travel times (“congestion pricing”).

Because if there’s anything that traffic engineers have discovered in the last few decades it’s that you can’t build your way out of congestion.  It’s the roads themselves that cause traffic.   The concept is called induced demand, which is economist-speak for when increasing the supply of something (like roads) makes people want that thing even more.  Though some traffic engineers made note of this phenomenon at least as early as the 1960s, it is only in recent years that social scientists have collected enough data to show how this happens pretty much every time we build new roads.  These findings imply that the ways we traditionally go about trying to mitigate jams are essentially fruitless, and that we’d all be spending a lot less time in traffic if we could just be a little more rational…

In 2009, two economists — Matthew Turner of the University of Toronto and Gilles Duranton of the University of Pennsylvania — decided to compare the amount of new roads and highways built in different U.S. cities between 1980 and 2000, and the total number of miles driven in those cities over the same period.  “We found that there’s this perfect one-to-one relationship,” said Turner.  If a city had increased its road capacity by 10 percent between 1980 and 1990, then the amount of driving in that city went up by 10 percent.  If the amount of roads in the same city then went up by 11 percent between 1990 and 2000, the total number of miles driven also went up by 11 percent.  It’s like the two figures were moving in perfect lockstep, changing at the same exact rate.

Now, correlation doesn’t mean causation.  Maybe traffic engineers in U.S. cities happen to know exactly the right amount of roads to build to satisfy driving demand.  But Turner and Duranton think that’s unlikely…A more likely explanation, Turner and Duranton argue, is what they call the fundamental law of road congestion: New roads will create new drivers, resulting in the intensity of traffic staying the same.  Intuitively, I would expect the opposite: that expanding a road network works like replacing a small pipe with a bigger one, allowing the water (or cars) to flow better. Instead, it’s like the larger pipe is drawing more water into itself.  The first thing you wonder here is where all these extra drivers are coming from.  I mean, are they just popping out of the asphalt as engineers lay down new roads?

The answer has to do with what roads allow people to do: move around.  As it turns out, we humans love moving around.  And if you expand people’s ability to travel, they will do it more, living farther away from where they work and therefore being forced to drive into town.  Making driving easier also means that people take more trips in the car than they otherwise would.  Finally, businesses that rely on roads will swoop into cities with many of them, bringing trucking and shipments.  The problem is that all these things together erode any extra capacity you’ve built into your street network, meaning traffic levels stay pretty much constant.  As long as driving on the roads remains easy and cheap, people have an almost unlimited desire to use them.

What Turner and Duranton (and many others who’d like to see more rational transportation policy) actually advocate is known as congestion pricing.  This means raising the price of driving on a road when demand is high.  During rush hour, drivers would have to pay a fee to use the most congested roads.  A few people will balk at the price and say to themselves, “I don’t really need to make this trip right now, I’ll go later.”  Roads in your city actually have a great deal of underused capacity.  Think about how they sit mostly empty, in the early afternoon, late evening, and at night.  If we gave drivers some extra incentive to avoid the most congested hours, we could better utilize the roads’ capacities.  The extra cost of driving would also make public transit a more attractive option, leading to more people using it.

Congestion pricing has been tried successfully in places like London, Stockholm, and Singapore. Other cities are starting to look at it as a solution.  Legislators in New York rejected a plan for congestion pricing in New York City in 2008 and San Francisco periodically toys with introducing the idea in downtown.  The problem?  Voters.  Nobody wants to pay for something that was previously free, even if it would be in their best interests to do so.

Duranton said that if congestion pricing is a non-starter, a more rational approach to parking could be a good secondary step in easing congestion.  Parking in most cities is far cheaper than it should be, and it’s too often free.  “Because it’s free, people will misuse it and it will be full all the time,” said Duranton.  Drivers searching for parking contribute significantly to road congestion.  “There are some estimates that say in the central part of cities up to 30 percent of driving is people just cruising around for parking,” Duranton said.

Increasing the price of a parking spot when demand is high would encourage people to leave sooner, letting more drivers occupy the same spot during the day.  San Francisco did exactly this starting in 2011 and the results have been a boon to retailers because more customers are able to park in front of their stores.