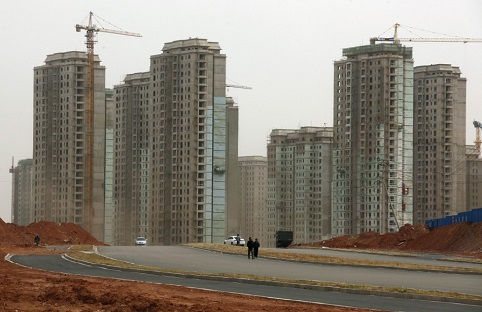 We worry about a significant real estate price correction in China.  A recent survey and comments by a senior real estate executive caught our attention.

More than one in five homes in China’s urban areas is vacant, and a current housing-price correction is putting additional pressure on the owners of such empty properties, according to a nationwide survey by researchers from China’s Southwestern University of Finance and Economics.  The vacancy rate of sold residential homes in urban areas reached 22.4% in 2013, or 49 million homes, up from 20.6% in 2011, according to the Survey and Research Center for China Household Finance, which conducted the analysis… The survey included homes left vacant by owners of multiple homes as well as those left empty by owners who have left the city to work elsewhere. In addition to the 49 million sold but vacant units, the survey estimated that China has 3.5 million homes that remain unsold.  The survey said that vacant homes are more likely to add to homeowners’ burden and cause them to suffer a financial loss.  If home prices fall by 30%, 11.2% of the vacant homes would be underwater on their mortgages, compared with just 3.3% of occupied homes, it said.  While most Chinese cities have shown only mild home-price declines so far, many analysts are concerned that sustained price falls could result in more homeowners holding mortgages that exceed the value of their homes.

The “golden era” for China’s property market has passed, according to China Vanke Co., the nation’s biggest developer, which is shifting its focus to homes for owner occupiers rather than investors.  “The period in which everybody makes money out of property is gone,” President Yu Liang told reporters May 26 in Dongguan, a southern city in Guangdong province.  “Vanke will take a cautiously optimistic approach to face the slowdown and target those buyers who need homes for self-use.”  The housing market threatens Premier Li Keqiang’s efforts to put the brakes on a slowdown in the world’s second-largest economy that is projected to grow at the weakest pace since 1990.  Moody’s Investors Service revised its credit outlook for Chinese developers to negative from stable last week, while home sales slumped 10 percent in the first four months of this year amid tight credit, reversing last year’s 27 percent jump and prompting developers including Vanke to cut prices.  “He should have seen some signs since it’s indeed difficult to make money now compared with before,” said Dai Fang, a Shanghai-based analyst at Zheshang Securities Co.  “Growth we’ve seen before is no longer possible and you won’t be seeing blossoms everywhere again,” he added, using a Chinese idiom to refer to the property boom seen in every city.