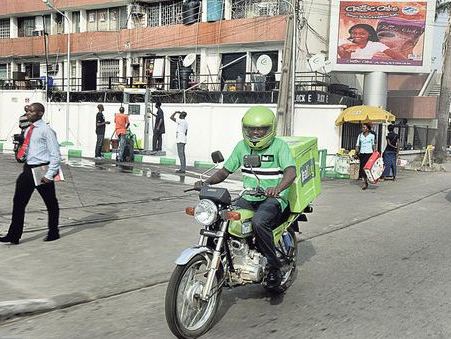 Entrepreneurs continue to try to figure out how to serve the developing middle class in Nigeria, even though the high prevalence of fraud presents unique problems that we do not have at home.  We enjoyed the paradox of online shopping on smartphones (which is also still developing in the U.S.) with the need to pay in cash (and the resulting motorcycle fleet).

Millions of people in this megacity are prospering and many are shopping online for the first time.

But in a country that has become synonymous with online fraud, they would sooner hand money to a courier than enter their credit-card numbers on a website. So online shopping site DealDey.com employs of fleet of motorcyclists to dart through gridlocked streets to meet online shoppers waiting to pay for their purchases with cash.

Already Africa’s most populous nation, Nigeria has a relatively young population that means growth lies ahead.  The country is projected to become one of the world’s five most populous countries by 2050, according to the United Nations.  It is now No. 7.  A third of Nigeria’s 167 million people already have entered the middle class.  And they are spending nearly half their monthly income on electronics, including toasters, microwaves and DVD players, according to investment bank Renaissance Capital.

That rush has caught the eyes of the world’s biggest retailers.  U.S.-based Wal-Mart Stores Inc. last year spent $2.4 billion to take a controlling share in the Massmart family of retailers, which is based in South Africa and has stores in Nigeria and nearby Ghana.

For online retailers, this teeming city’s young consumer class and creaky infrastructure, such as jammed roads, present an opportunity.  South Africa’s Kalahari.com opened for orders from Kenya and Nigeria in 2009 but based its warehouse in distant Johannesburg.  That raised shipping costs beyond the reach of many potential customers, forcing the company to retreat the following year. n W

Online shopping has gotten a boost recently.  Three years ago, two-thirds of Nigerians hadn’t heard of a debit card, according to a study by London research firm Cards International.  Lately, though, the number of debit-card accounts has jumped, spurred by a government push to popularize card-reading machines and cut waiting times to get cards.

A third of Nigeria’s population is online.  And not just at work on clunky desktop computers.  Thanks to inexpensive data phones, a growing number of people are mobile, browsing on the bus.