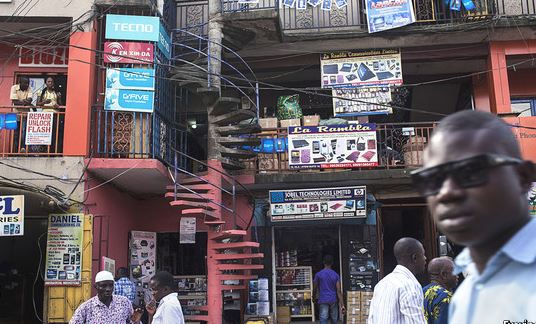 Nigeria suffers from a variety of maladies — excessive red tape, murky property rights, poor logistics infrastructure, etc. — that make it difficult for companies to operate in the country, but its burgeoning and increasingly educated and wealthy population (it could overtake U.S. population by 2045) make it the stuff of dreams for consumer products businesses.  It is an interesting story to watch, both for Nigeria’s own sake as well as for what it may portend for the rest of the African continent.

Africa contains some of the world’s fastest-growing economies.  Nigeria is the largest.  In April its official GDP figures were revised up by 90% after hopelessly dated numbers were rebased.  Roughly one in five of Sub-Saharan Africa’s 930m people lives there.  Its population is growing at a rate of 2-3% a year.  Its people are young, ambitious and increasingly well educated.

Nigeria’s promise has made it a test-bed for the Africa strategies of consumer-goods firms.  This is not only because of its size.  It is also because of the spread of Nigerian culture — its music and movies — around Africa, says Yaw Nsarkoh of Unilever.  The Anglo-Dutch company has been trading in Nigeria for nearly a century and is expanding its operations.  Nestlé, a Swiss rival, plans to triple sales over the next decade.  Procter & Gamble, another global consumer giant, has just completed a factory near Lagos, its second in Nigeria.  SABMiller, the world’s second-largest beermaker, built a state-of-the-art brewery in Onitsha, in the Niger Delta, in 2012 and is already adding capacity.

Just as Nigeria is used as shorthand for the business opportunity in Africa it is also a summary of the continent’s shortcomings.  An outbreak of Ebola in Guinea has spread to Lagos.  Attacks by Boko Haram, a fanatical Islamist group, are a chilling reminder that conflict is never far away in Africa. Transport and power infrastructure is poor.  The rules of the game for business can change quickly and for the worse.  Reaching a mass of consumers is no small task because most shopping is done in open markets or at roadside stalls.  Yet a growing band of global firms believes the business opportunity in Nigeria will outweigh the risks.

In such a fragmented market it is difficult to forecast sales.  Transport bottlenecks make supply erratic.  So consumer businesses are obliged to keep plenty of stock in reserve.  Fresh bread is a draw to Shoprite’s stores, so it keeps a warehouse full of flour to ensure a constant supply, says Dianna Games of the South Africa-Nigeria Chamber of Commerce.  Lean manufacturing is a non-starter.  PZ Cussons, the British firm behind Imperial Leather soap, keeps up to three months of stock at its factories in Nigeria.  In contrast the liquid-soap plant near its Manchester headquarters carries inputs to keep it going for just four hours, plus a few lorry-loads of finished goods.

Dispersed customers and inefficient supply chains increase the cost of doing business.  That gives rise to the basic challenge for consumer-goods firms: how to sell to a mostly poor population at prices that are by necessity above global norms.

“You start by asking what consumers can pay,” says Unilever’s Mr. Nsarkoh. “You then ask: ‘how can we supply at that price?’ ”  Manufacturers aim for price points of 10 or 20 naira (6 or 12 cents) that are a gateway to low-income shoppers.  The trick is to find a serving that is big enough not to be absurd but small enough to make those prices profitable: a 4g stock cube, say, or 26g of detergent, or 13g of toothpaste.

Newer entrants are pushing prices down.  SABMiller’s Hero lager was launched in 2012 for 150 naira a bottle, compared with 200 naira for Star, the market leader and 250 naira for Guinness.  It also offers chibuku, an even cheaper brew developed in Zambia.  UAC Foods, a local firm, has not increased the price of its Gala sausage rolls since 2006, says Robyn Collins of Renaissance Capital, an investment bank.  The price of Nestlé’s Maggi stock cubes is stuck at three for 10 naira. When the cost of inputs rises, it is pack sizes that usually adjust.

A second big challenge is getting goods to customers. “It is not just the poor roads in remote areas; it is also the variety of languages,” says Kais Marzouki of Nestlé, which delivers directly to shops in other emerging markets but in Nigeria opts to use third-party distributors instead.  PZ Cussons has a network of 25 cash-and-carry depots dotted around Nigeria.  Traders bring a lorry and stop off at separate warehouses to collect each category of goods.  Fierce competition among traders keeps their markup as low as 1-2%, says Brandon Leigh, PZ’s chief financial officer.

Three lessons emerge for outsiders doing business in Nigeria.  First, be even more careful than usual about your choice of partner.  The biggest error a business can make, says a senior executive at a big consumer-goods firm, is to pick an incompetent or dishonest distributor.  Even arrangements with a sound local firm can fail if the incentives are wrong.  Nando’s, a South African grilled-chicken chain, chose UAC Restaurants, part of a Nigerian conglomerate, to run its franchise, even though UAC owned a fast-growing rival chain, Mr. Biggs…

A second error is to assume that a model that works elsewhere will be successful in Nigeria. Woolworths, a South African clothing and food retailer, closed its three shops in Nigeria after less than two years, citing high rents and complex supply-chains as reasons.  These problems aside, the firm made too little effort to promote its brand or adapt its wares to local demand.  The retailer relied on the changing seasons to boost turnover for clothes but Nigeria’s clothing market had no such natural churn. It is hot all year round.

The third mistake is to run a Nigerian business by remote control.  Companies do well by becoming Nigerian.  Guinness, brewed in Lagos since the 1960s, has been adopted as a Nigerian brand (only Britain drinks more of the stuff).  Nestlé, Unilever and PZ Cussons have been in Nigeria for yonks and have strong local identities. These businesses give power to local managers so they can adapt to shifting conditions, says Ms. Games.  The success of Shoprite in Nigeria is in part a result of constant tweaks to its supply chain.