Neutrinos Straight from the Source 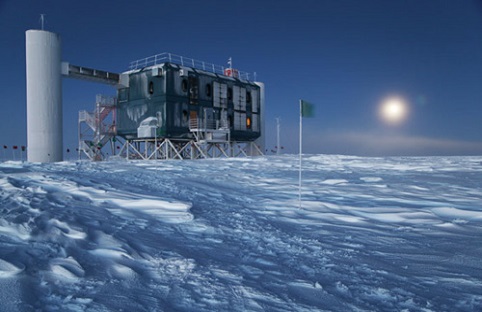 Scientists are using a subterranean telescope dubbed IceCube to collect data on high energy neutrinos, which are believed to be created by powerful cosmic events like gamma-ray bursts, black holes, or newly forming stars. Due to their weak interactions with matter and resulting ability to move unimpeded over long distances in the universe, these neutrinos provide a unique way to observe extraterrestrial processes undetectable by optical telescopes.

IceCube is a giant neutrino-finding telescope buried in the cold darkness 1.5 kilometers beneath the surface in Antarctica.  With that much frozen weight above it, the ice at this location gets smushed, driving out any air bubbles and making it perfectly clear.  This allows the 5,160 light-sensitive detectors used in IceCube to see faint flashes across a large distance.  Trillions of neutrinos pass like ghosts through the cubic kilometer of ice that IceCube is monitoring.  Every once in a while, one of these tiny particles will crash right into the oxygen atom of a frozen water molecule, producing a faint blue spark.  The flash of light tells scientists the direction and energy that a neutrino had when it flew into the detector.

Astronomers hypothesize that high-energy neutrinos are created in extremely energetic processes in the distant universe.  Active galactic nuclei (AGN) and gamma-ray bursts are some of the brightest cosmic events that we see but researchers don’t really know how they work.  Scientists speculate that giant black holes and collapsing massive stars are behind these mysteries but have yet to understand their mechanics.  Because they barely interact with anything, neutrinos get created in these events and then easily escape, shooting out in a direct line across the universe.  These neutrinos have insane amounts of energy, more than a 1,000 times the energy that protons are smashed at CERN’s Large Hadron Collider.  Astronomers hoped that IceCube would see these lively neutrinos, allowing them to trace back where in the sky they arrived from, and help them figure out what’s going on with the unexplained bright sources.