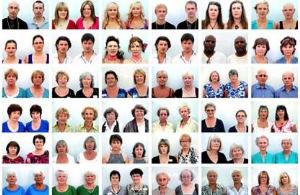 Despite sharing the exact same genes and generally the same upbringings, identical twins often have markedly different outcomes.  Scientists at King’s College in London have a theory as to why.  On a personal level, as a parent of identical twin girls David is running an active experiment — he reports that age magnifies differences.

Barbara and Christine, who enlisted with King’s College’s (London) twin studies unit several years ago, are like many identical twins. In some ways, they are very, very alike, in looks, for example.  But in other ways, they are noticeably dissimilar — and that is far harder to explain.  “We see it in so many different ways,” says [Professor Tim] Spector.  “For example, our research has shown that twins rarely die of the same disease.  Yet they share many other features, such as height.  It is not a straightforward business.”

It sounds baffling.  After all, identical twins have the same genes, share the same womb and usually experience the same childhoods.  “Most of the twins recruited to our study went to the same school and lived together, eating the same food for the first 18 or so years of their lives,” says Spector, whose pioneering study celebrates its 21st birthday next month.  “But the outcomes of their lives are often very different indeed.”

“We now began to look not at the similarities between identical twins but the differences.  It was a shift in perception really.  Our work shows that the heritability of your age at death is only about 25%.  Similarly, there is only a 30% chance that if one identical twin gets heart disease the other one will as well, while the figure for rheumatoid arthritis is only about 15%.”

It is a baffling observation: individuals with identical genes and often very similar conditions of upbringing but who experience very different life outcomes.  What could be the cause?  The answer, says Spector, came to him in a Damascene moment four years ago.  The causes of these differences were due to changes in the human epigenome, he realized.   “Essentially, epigenetics is the mechanism by which environmental changes alter the behavior of our genes,” he says.  “This involves a process known as methylation, which occurs when a chemical known as methyl, which floats around the inside of our cells, attaches itself to our DNA.  When it does so, it can inhibit or turn down the activity of a gene and block it from making a particular version of a protein in our bodies.”  Crucially, all sorts of life events can affect DNA methylation levels in our bodies: diet, illnesses, ageing, chemicals in the environment, smoking, drugs and medicines.

Thus epigenetic changes produce variation in disease patterns.  And recent experiments carried out by Spector and his colleagues, in which they have looked at methylation levels in pairs of identical twins, back the theory.  “We have studied identical twins who have different tolerances to pain and shown that they have different states of methylation.  We have also produced similar results for depression, diabetes and breast cancer.  In each case, we have found genes that are switched on in one twin and switched off in the other twin.  This often determines whether or not they are likely to get a disease.”

If nothing else, the idea of epigenetic changes explaining the variability in twin behavior and illness strikes a chord with Christine.  “The idea that I am different from my identical twin sister being due to life events makes sense.  Barbara got married first.  Many twins will tell you that when that happens the other twin is left grieving.  That is how it felt to me.  And later I suffered from leukemia and I have also been divorced.  That would leave a mark on anyone.  Luck plays its part.”