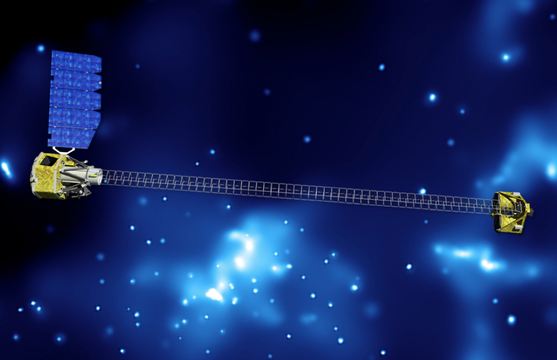 NASA’s newest space telescope, an ambitious X-ray observatory, launched into orbit this week on a mission to peer deep into the universe and study the violent regions around black holes.  Its multi-vehicle launch is, on its own merits, a feat of science and engineering.

The Nuclear Spectroscopic Telescope Array (NuSTAR) spacecraft launched spaceward at the tip of an Orbital Sciences Pegasus XL rocket, which itself was carried into launch position by a high-altitude L-1011 “Stargazer” jet aircraft.  At 12 p.m. EDT (1600 GMT), the plane dropped the rocket in midair, where the booster fired its engines for its climb into the sky.

The $165 million NuSTAR observatory is beginning a two-year mission to probe high-energy regions of the universe, including black holes and the remnants of stars that died in supernova explosions. It will use a telescope sensitive to regions of the X-ray spectrum of light that are higher in energy than any space observatory before it.  “With NuSTAR, we’ll be able to image the sky, read the story and understand things like how galaxies form, and how black holes grow,” said NuSTAR principal investigator, Fiona Harrison of Caltech, during a Monday (June 11) press briefing.  “It will pinpoint these massive black holes and locate them within galaxies.”

About a week from now, NuSTAR will extend a 33-foot (10-meter) mast that will separate the spacecraft’s optics from a focal point where a camera is placed, making the whole instrument roughly the size of a school bus.  The telescope uses two optics units made of 133 nested layers of glass each, which will collect X-ray light and deflect it to the focal point at the mast’s other end.

Click here for more from Space.com
Back to C&B Notes