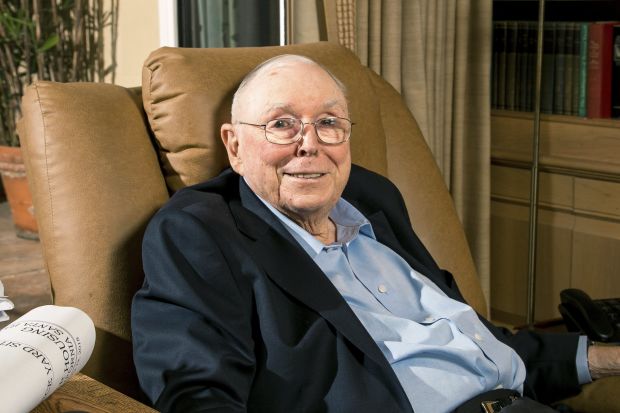 Congratulations to Jason Zweig and Nicole Friedman for bringing this six-hour interview with Charlie Munger to the world. The Q&A, which covers a wide-range of topics, reveals more of the brilliance and uncommon sense of this Renaissance man. 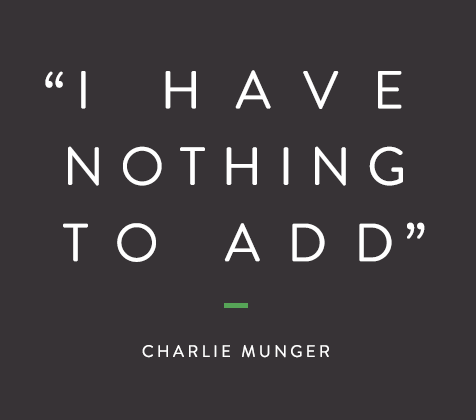 A: Well, they don’t have enough land. It’s just, of course, it’s difficult…everything in a crowded place. All these universities, when they want to take in more people, they really jam it. And so I designed, I can’t tell you, I worked for at least a year and a half on various designs. And the one thing I never got was below two people in every sleeping room because the economics forced the decision. But I always hated it. Because every student hates sharing your own sleeping space with some other person.

And finally one day I was working on it [and] I saw a way to give every student his own sleeping room, small, and the minute I saw that I realized that was the correct solution. And everything I thought before is massively stupid. And I’d worked a year and a half on it!

How can we get any simpler than using the ship-architecture principles on land? If it works on a ship, it’ll work on land, and the minute you do that, you get a lot more density of use of land, get huge economic advantages, and the students are nearer one another, which helps the education because they educate each other.

Now, when I went to the University of Michigan, I knew nobody, basically, in the whole goddamn university except the people in my fraternity house, a pretty stupid way to go to a great university. Everyone did it that way in those days and it was really stupid, but I’m still trying to fix that stupidity. Throw people together in a pleasant way. Constructively. Let the little darlings educate one another.

The other thing that was amazing is that, at every campus, all the classrooms and everything are totally vacant except when the classes are there, which is massively stupid. I realized that the same space that would have held a class or a seminar could hold a bunch of students having a private meeting, or a recreational meeting, and the same space that held a lecture hall would do a movie or a musical performance. So I decided to put—into the housing —lecture halls and classroom space that would convert to recreational use.

And that’s the most obvious idea in the whole goddamn world. Just think of what sense it makes. Anything else is massively stupid.

But the whole world has been massively stupid on both sides of the Atlantic on that subject for what, 300 years? I’m just changing it. And I know I’m right.

But I didn’t come to this with some brilliant flash or something. It took me a long time of wrestling and doing it wrong and drawing and redrawing.

Part of the reason I’ve been a little more successful than most people is I’m good at destroying my own best-loved ideas. I knew early in life that that would be a useful knack and I’ve honed it all these years, so I’m pleased when I can destroy an idea that I’ve worked very hard on over a long period of time. And most people aren’t.

Q: Most people hate that.

A: Yes. But actually, I know how much power and wealth is in it, so I like it. Plus that’s enlightenment. Power, wealth and enlightenment. Not a bad combination.

Q: Why is it so hard to overturn entrenched ideas?

A: It’s insane. I’m fixing a lot of insanity. But that’s my standard thing. I don’t know how to do anything complicated. I know how to avoid insanity, even if it’s conventional. That’s all I know. I don’t even try to be smart. I just try and be not insane and pay no attention to the traditions.

You want the architecture to facilitate the world the way it is and the world the way it’s going to be, not the way the world has been, and it’s not very difficult. It’s just the most elementary common sense. But you’ve got to throw away some of the old precedents, which are stupid.

The interesting question is, when things are perfectly obvious and you have a great profession like architecture, why is everybody so massively stupid? And the answer is it’s hard to be reasonable. There are a million tricks the human mind plays on its owner. That’s what causes stupidity. Think of how many times you’ve said to yourself, ‘Why in the hell did I do that?’

Q: Didn’t Lee Kuan Yew say something about the importance of benefiting from lessons paid for by others?

A: Of course! I want to learn as much as I can vicariously. It’s too painful to do it by personal hardship. Of course. I collect big calamities in my head and big stupidities. I do that so I can avoid them. Think of how little in the way of big calamity has ever come to Berkshire. And it’s not that we don’t ever have reverses and disappointments in that or never have whole businesses disappear. But averaged out, we have less misfortune than others.

Another thing that really helps is people, a lot of people think that real selfishness, very extreme, is what works. But it doesn’t.

If you have a reputation for being decent to work with and unselfish, you make more money, not less. And at Berkshire, I can’t tell you the things that we have bought where the people wanted a good home for something that they love and they trusted us to take care of their loved one. That sounds ridiculous to talk about, in that language about businesses. But why wouldn’t you love something you spent your life building up? It’s very natural to love it – it’s your own creation. Of course you want it in good hands.

And so, so, good morals and a reputation for good morals are enormously valuable, and it’s just so simple…. The right way to go through life is win-win. Just anything else is crazy. To be all take and no give is just an absolute disaster.

Charlie Munger, Unplugged In a six-hour interview, Berkshire Hathaway Vice Chairman Charlie Munger held court on what’s led to his success in a long career and what he looks for in a business.