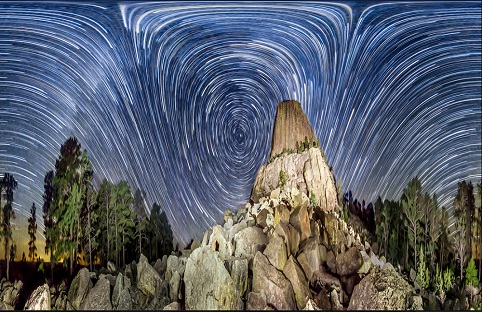 In the first half of 2013, Vincent Brady decided to travel the word to document the night sky. He built a unique combination camera that allows for an unusual perspective of celestial bodies — some of which call to mind Van Gogh’s The Starry Night.

But instead of taking your typical long-exposure shots, Brady designed himself a custom camera rig that’s allowed him to capture stunning 360 panoramic images of the stars and Milky Way moving in concert.  As Brady tells it, a couple years back he was experimenting with shooting 360 panoramas during the day and long exposure shots at night when it struck him that it might be pretty cool to combine the two techniques.  It was a good instinct.

To make the rig, Brady took four refurbished Canon T2Is, stuck fisheye lenses on them, and attached the cameras to a wooden bracket.  He starts setting up just as the sun goes down, and waits a couple hours until it’s dark as possible to begin shooting.  “I put the rig on a tripod, clean the lenses, get the cameras synced up, and then I go take a nap,” he says.  The cameras take photos every 1 or 2 minutes for 2 to 3 hours, or until his camera battery runs out.  Brady usually walks away with 150 pictures from each camera during a session, which he then stitches together and layers using a custom script for the panoramic time lapse effect.

Since he started on his road trip, he’s taken photos in Missouri’s Ozark region, British Columbia, Arizona, and Utah (his favorite place to shoot so far).  “When I go out scouting locations, I bring the sky charts with me to try and figure out where the Milky Way will be,” he says.  “I certainly wasn’t an astronomer when I started this, and I still don’t feel like one.”