Milk Does a Population Good 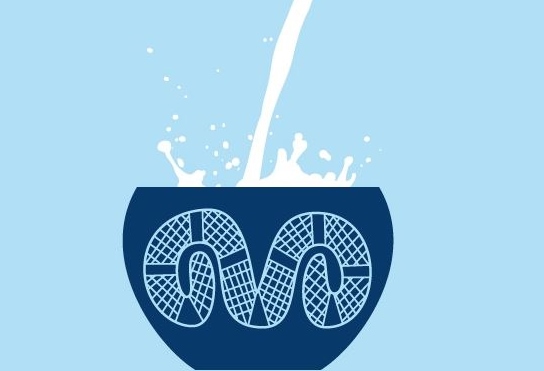 Scientists believe that adults were almost universally lactose intolerant until about 7,500 years ago.  The evolved ability to drink milk gave a subset of people, particularly those concentrated in what is now modern-day Northern Europe, a nutritional benefit that translated into higher fertility rates and population advantages.

During the most recent ice age, milk was essentially a toxin to adults because — unlike children — they could not produce the lactase enzyme required to break down lactose, the main sugar in milk. But as farming started to replace hunting and gathering in the Middle East around 11,000 years ago, cattle herders learned how to reduce lactose in dairy products to tolerable levels by fermenting milk to make cheese or yogurt.  Several thousand years later, a genetic mutation spread through Europe that gave people the ability to produce lactase — and drink milk — throughout their lives.  That adaptation opened up a rich new source of nutrition that could have sustained communities when harvests failed.

This two-step milk revolution may have been a prime factor in allowing bands of farmers and herders from the south to sweep through Europe and displace the hunter-gatherer cultures that had lived there for millennia.  “They spread really rapidly into northern Europe from an archaeological point of view,” says Mark Thomas, a population geneticist at University College London. That wave of emigration left an enduring imprint on Europe, where, unlike in many regions of the world, most people can now tolerate milk. “It could be that a large proportion of Europeans are descended from the first lactase-persistent dairy farmers in Europe,” says Thomas.

Most people who retain the ability to digest milk can trace their ancestry to Europe, where the trait seems to be linked to a single nucleotide in which the DNA base cytosine changed to thymine in a genomic region not far from the lactase gene.  There are other pockets of lactase persistence in West Africa, the Middle East and south Asia that seem to be linked to separate mutations.  The single-nucleotide switch in Europe happened relatively recently.  Thomas and his colleagues estimated the timing by looking at genetic variations in modern populations and running computer simulations of how the related genetic mutation might have spread through ancient populations.  They proposed that the trait of lactase persistence, dubbed the LP allele, emerged about 7,500 years ago in the broad, fertile plains of Hungary.

Once the LP allele appeared, it offered a major selective advantage.  In a 2004 study, researchers estimated that people with the mutation would have produced up to 19% more fertile offspring than those who lacked it.  The researchers called that degree of selection “among the strongest yet seen for any gene in the genome”.  Compounded over several hundred generations, that advantage could help a population to take over a continent.  But only if “the population has a supply of fresh milk and is dairying”, says Thomas.  “It’s gene-culture co-evolution.  They feed off of each other.” 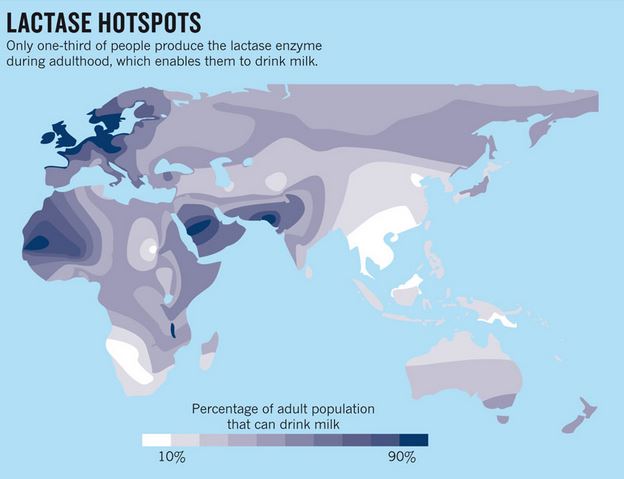 Click here for more from Nature.com
Back to C&B Notes