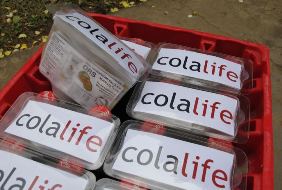 A non-profit has created a simple, elegant solution to distribute medicine in Africa by leveraging Coca-Cola’s massive distribution network.

You can buy a Coke pretty much anywhere on Earth.  Thanks to a vast network of local suppliers, Coca-Cola has almost completely solved distribution, getting its product into every nook and cranny where commerce reaches.  There are places in the world where it’s easier to get a Coke than clean water.  In the 1980s, Berry was an aid worker in Zambia, and when he looked at Coke’s success, he saw an opportunity.  “Child mortality was very high and the second-biggest killer was diarrhea, which is simple to prevent,” he says.  The standard treatment is oral rehydration solution, or ORS, which is essentially salt, sugar and water.  “I had the idea of transporting ORS through the Coca-Cola system.”

In April 2008, he began a campaign on Facebook.  A groundswell of support gave his project, dubbed ColaLife, the attention it needed to get noticed by the BBC and, through the British broadcaster, by Coca-Cola itself.  ColaLife began collaborating with one of Coca-Cola’s African bottler/distributors, and the beverage giant shared advice and information about how its distribution network operates…The result of their efforts so far is the AidPod, a wedge-shaped container that fits between the necks of bottles in a Coca-Cola crate.  For the pilot program, they are using the AidPods to distribute an anti-diarrhea kit, called “Kit Yamoyo” (“Kit of Life”).

The AidPod’s are a clever packaging solution, born of a very particular design problem.  Because the vision was to physically piggyback on Coke’s distribution system, they needed to work with the crates used to move the popular soda to retailers.  Initial designs experimented with pouches on the side and tubes that could be slotted in place of a bottle.  Neither option would have worked, as both would have meant less space for Coke.  Then, genius struck.  “My wife said, ‘Why don’t we make use of the unused space?’” says Berry.

Click here for more from Wired.com
Back to C&B Notes