Meddling in the Rice Market 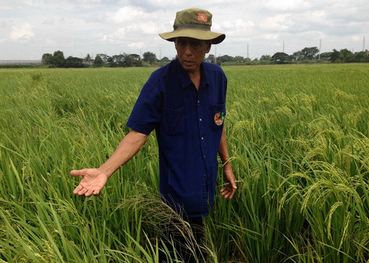 The Thai government is attempting to intervene in the rice market in a bid to subsidize the income and quality of life of rural farmers in the country.  This policy is not sustainable long-term, and the market movements in rice prices has made this approach to income reallocation vastly more expensive than the government initially expected or intended.

There is more money sloshing around here in this rice-farming village than there has been in years.  Local farmer Vichien Pornlamchiak reckons he could earn $20,000 this year, a large income by rural Thai standards.  His friend, Surin Wongkrakjang, estimates sales are up around 20% from a year ago at her restaurant in the shadow of the local Buddhist temple as local farmers spend their cash on spicy noodle soup.

There is a problem, though: It is the government that is buying rice, and nobody here is sure about how long it will last.  Prime Minister Yingluck Shinawatra’s government came up with the multibillion-dollar subsidy shortly after taking office last August, saying it was a way to pump cash into Thailand’s rural heartland where incomes have lagged behind those in urban areas.  The idea was an ambitious one: to use Thailand’s traditional position as the world’s largest rice exporter to influence the entire global market for the grain by hoarding supplies rather than selling them overseas.  That, in turn, was supposed to drive up prices around the world while ensuring a higher standard of living for Thailand’s farmers for years to come as the government gradually exited from the market.

Last year, Thailand supplied around 28% of the 35 million tons of rice exported globally in 2011.  Its influence on global prices is magnified by the relatively small proportion of rice stocks — around 7% of total production — that are traded internationally.  But the United Nations’ Food and Agriculture Organization expects exports to fall to 34.2 million tons this year as rice-consuming nations step up efforts to secure their own food supplies after 2008’s fourfold increase in global prices.  That price shock came after India switched from wheat to rice to supply its poverty-alleviation programs and stopped exports of all non-basmati grains of rice, prompting other countries such as the Philippines to start buying heavily.  But now, as several nations accelerate production, world prices are largely static.  That leaves the Thai government potentially sitting on a huge loss.  To recoup its spending, Thailand’s government would have to sell at about $800 a ton once milling and warehousing costs are factored in, traders say.  That compares with market prices of about $400 for similar grains of Vietnamese rice and a $600 going rate for Thai rice.

Perhaps the cruelest twist of all, but not entirely unpredictable given all of the market meddling: