Living in a QE World 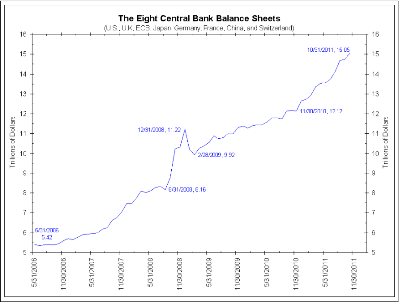 We almost always comprehend data better in a graphical form.  These charts display the actions of the various central banks in a way that easily shows the magnitude of their interventions.

QE is an expanding of balance sheets via increasing bank reserves.  The purpose of QE is to increase bank reserves through purchases

All in One SEO Pack

If this field is checked, we will attempt to retrieve OG/Metadata from the article for the reference link. If this attempt fails, we will use the below content. If unchecked, we will default to the content below.

of fixed income securities in order to lower interest rates.  This makes fixed income securities relatively unattractive/overvalued and pushes investors out the risk curve.  This should increase buying for riskier assets such as stocks, pushing them higher in price.  Theoretically these higher prices should lead to a wealth effect and increased economic activity.

Given this definition and purpose, it is fair to compare the size of these balance sheets (now $15 trillion) to the capitalization of the world’s stock markets (now $48 trillion).

Recently, the eight central bank balance sheets have spiked back to 33% of world stock market capitalization.  This has come about not by lender of last resort loans, but rather by QE expansion (buying bonds with “printed money“) even faster than world stock markets are rising.