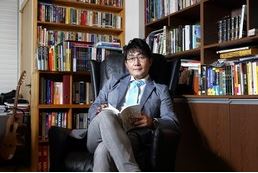 After-hour tutoring programs in Korea are meritocracies that have, by most indications, vastly improved the country’s academic performance.  This story highlights how teachers are using the internet to distribute lessons and enhance their earnings, a trend we suspect will eventually transform education in the U.S.

Kim Ki-hoon earns $4 million a year in South Korea, where he is known as a rock-star teacher — a combination of words not typically heard in the rest of the world.  Mr. Kim has been teaching for over 20 years, all of them in the country’s private, after-school tutoring academies, known as hagwons.  Unlike most teachers across the globe, he is paid according to the demand for his skills — and he is in high demand.

Kim Ki-Hoon, who teaches in a private after-school academy, earns most of his money from students who watch his lectures online.  ‘The harder I work, the more I make,’ he says. ‘I like that.’ Mr. Kim works about 60 hours a week teaching English, although he spends only three of those hours giving lectures.  His classes are recorded on video, and the Internet has turned them into commodities, available for purchase online at the rate of $4 an hour.  He spends most of his week responding to students’ online requests for help, developing lesson plans and writing accompanying textbooks and workbooks (some 200 to date)…

Thanks in part to such tutoring services, South Korea has dramatically improved its education system over the past several decades and now routinely outperforms the U.S.  Sixty years ago, most South Koreans were illiterate; today, South Korean 15-year-olds rank No. 2 in the world in reading, behind Shanghai.  The country now has a 93% high-school graduation rate, compared with 77% in the U.S… Viewed up close, this shadow system is both exciting and troubling. It promotes striving and innovation among students and teachers alike, and it has helped South Korea become an academic superpower.  But it also creates a bidding war for education, delivering the best services to the richest families, to say nothing of its psychological toll on students.  Under this system, students essentially go to school twice — once during the day and then again at night at the tutoring academies.  It is a relentless grind.

“Students are the customers,” Ms. Lee says.  To recruit students, hagwons advertise their results aggressively.  They post their graduates’ test scores and university acceptance figures online and outside their entrances on giant posters.  It was startling to see such openness; in the U.S., despite our fetish for standardized testing, the results remain confusing and hard to interpret for parents.  Once students enroll, the hagwon embeds itself in families’ lives.  Parents get text messages when their children arrive at the academies each afternoon; then they get another message relaying students’ progress.  Two to three times a month, teachers call home with feedback.  Every few months, the head of the hagwon telephones, too.  In South Korea, if parents aren’t engaged, that is considered a failure of the educators, not the family.