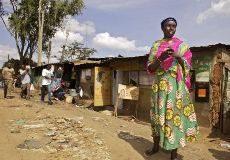 The increasing prevalence of mobile phones and their related carrier networks are creating opportunities for both for-profit and not-for-profit entities to improve quality of life for people in underdeveloped countries.  This article primarily explores what is happening in healthcare in Kenya, although technology start-ups are creating change in a variety of other areas (personal finance being a big example).

Last year [Erick] Njenga and three [Strathmore University] classmates developed a program that will let thousands of Kenyan health workers use mobile phones to report and track the spread of diseases in real time — and they’d done it for a tiny fraction of what the government had been on the verge of paying for such an application.  Their success — and that of others in the nation’s fast-growing startup scene — demonstrates the emergence of a tech-savvy generation able to address Kenya’s public-health problems in ways that donors, nongovernmental organizations, and multinational companies alone cannot.

iHub is a Nairobi-based technology incubator that is at the center of the start-up culture developing in the city.  It is taking cost out of the system and bringing solutions to life much more quickly for Kenyans:

The incubator opened in 2010 and now counts more than 6,000 members, with an average of 1,000 new applications a year.  Most members are merely part of iHub’s online community, but more than 250 of them use the space.  Some 40 companies have launched from iHub, and 10 have received seed funding from venture capitalists.  The most successful so far is Kopo Kopo, which helps merchants manage payments from M-Pesa and similar services.  One key to iHub’s growth is that Kenya’s IT infrastructure has improved significantly.  The first Internet fiber connection landed at the Kenyan coast in 2009 (previous service had come through satellite dishes in the Rift Valley), and the country’s first truly mass-market Android smart phone went on sale in 2010, for $80.  Safaricom now counts 600,000 smart phones of all kinds on its network and expects them to make up 80 percent of the market by 2014.

An interesting side note highlighted in this article: most of the growing number of mobile phones in Kenya are not smart phones, which creates a particular challenge for developers to work around and speaks to the larger opportunity to make smart phones (as they become more affordable) a backbone of life in these countries and avoid much of the “wired” infrastructure that is a part of life (and an expensive one to maintain and expand for utilities) in the more developed world.