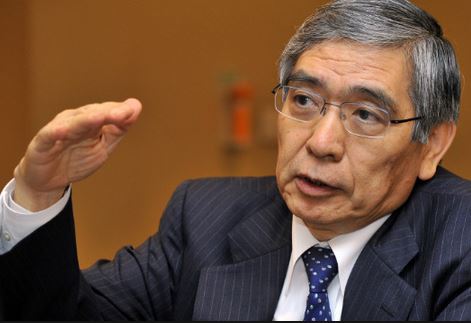 The Bank of Japan is buying nearly all of the debt its government is issuing to support massive deficit spending.  In fact, there are not enough remaining JGBs to make it worth the Royal Bank of Scotland’s effort to remain a primary dealer.  With negative yields extending almost all the way to the 10-year mark on the yield curve, Japan’s monetary experiment is deep into the theater of the absurd.

Japan has long been the world’s living laboratory for observing what happens when a large chunk of the population grows old. Now, it’s also a financial testing ground — demonstrating how a huge, developed economy will live without a bond market.

The nation has loads of bonds – 1 quadrillion yen ($8.67 trillion) worth — but no real market for them.  That’s because the Bank of Japan, in its aggressive campaign to end deflation, is nationalizing the debt arena.  In response, Royal Bank of Scotland is saying sayonara to Japan’s debt business, giving up its position as a primary dealer.

Haruhiko Kuroda, governor of Japan’s central bank, has been buying up roughly $100 billion in debt per month, immobilizing trading opportunities and giving new meaning to the old concept of “crowding out.”  That’s when government dominates an area of the private sector to the point where the laws of supply and demand stop working.  That’s where Japan finds itself as the BOJ bigfoots individual buyers and narrows the investor base.  With more than 90 percent of IOUs held domestically, Japan is already the Galapagos of debt realms…

Another problem is the replacement of old bubbles with new ones.  As I’ve written before, Kuroda is adding fresh fuel for the world’s most obvious bond bubble.  Even if the BOJ were to achieve its 2 percent inflation goal, it would struggle to keep yields from skyrocketing.  Kuroda would need to buy up ever larger blocks of debt, further warping the financial system and forcing the BOJ to feed an expanding pyramid scheme.