In the Grocery Trenches in India 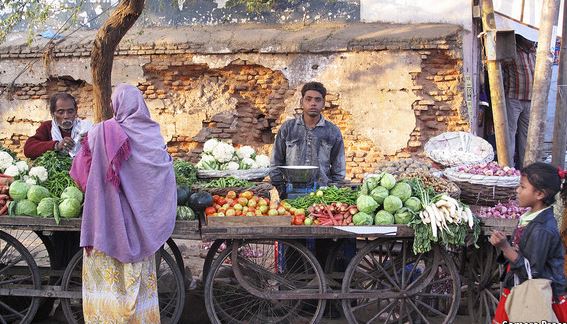 Supermarkets are notoriously difficult businesses with razor-thin margins, and cultural reasons make things even more difficult for operators in India.  Small format convenience stores may be best suited to displace stalls and family-owned kiranas, and some corporate chains are trying to entice these owner-operators to run stores under their banner — with the promise of better economics, of course.  This model has worked well for Oxxo in Mexico.

On the morning of Dussehra, a Hindu festival, Amar Singh is explaining why he stocks “exotic” produce, such as broccoli and iceberg lettuce, at his vegetable stall in Thane, a commuter city north of Mumbai.  “I have to keep the customer in my grasp,” he says.  Mr. Singh has traded hereabouts for 20 years, and seems unperturbed by the supermarket chains whose branches have recently sprouted nearby.  They are cheaper, he says, but they cannot match him on quality.  As he speaks he sorts a tray of beans, discarding stringier ones. His assistant, Dabloo, has spent the early hours going through sacks of produce at a wholesale market to pick the best stuff.

The 10m-12m small traders like Mr. Singh are a protected species. Complex and changeable rules governing foreign direct investment have made it tricky for rich-world chains to set up shop in India.  They might count themselves lucky.  India’s home-grown supermarkets account for only 2% of food and grocery sales and are struggling to make a profit.  Revenues have not kept pace with rising rents.  The Thane branch of Reliance Fresh, one of India’s big chains, shut up shop recently.  More closures seem likely.  The bet made by the chains was that as India became richer, its consumers would abandon curbside stalls and kiranas (small family-owned shops) for air-conditioned stores with wide aisles and broad ranges.

But being so nimble is not easy for the big chains.  Mindful of the benefits of scale, they initially built big out-of-the-way stores with huge ranges.  “The original thinking was, ‘give the consumer a roomful of choice and he’ll change habits’,” says a retail boss.  Aisle upon aisle of global brands did not prove such a big draw.  Shopping in air-conditioned comfort has less appeal after a long and uncomfortable journey on potholed roads.  India’s shoppers have plumped for convenience over variety.  That has forced a rethink by some of the big grocery retailers.   On a Friday evening, Kishore Biyani, boss of Future Group, is visiting one of his convenience stores in Malabar Hill, a posh neighborhood in Mumbai. The KB’s Fairprice store has four narrow aisles, chilled cabinets and stocks around 1,000 products. Mr. Biyani’s firm runs around 180 of these stores and would like to have 5,000 by 2018, in part by selling franchises to kirana-owners…

Mr. Biyani makes a good case for betting on convenience stores.  Turnover per square meter is far higher than in supermarkets.  Small plots are also easier to acquire: the Malabar Hill store is in a petrol station.  A third of the stock is own-label products, including a brand of fruit-based drink, named “Sach”, endorsed by Sachin Tendulkar, a revered cricketer.  Eventually 80% of goods in his smaller stores will be private-label, says Mr. Biyani, augmented by a single, must-have brand per category.  Limited-range retailers with own-label products, such as Aldi and Lidl, have grown rapidly in Europe and America.  He vows: “I’ll be cheaper. They won’t want to come to India”.  The convenience-store format may fit consumers’ preferences but it places greater demands on retailers.  It takes three deliveries a day, one each for fresh, frozen and packaged goods, to restock the KB’s Fairprice at Malabar Hill.  At that frequency the costs of “shrinkage” (packing errors, pilfering, and so on) can add up, says Mr. Singhi, of BCG.  Another challenge is to ensure that franchisees give customers the sort of personalizd service they are used to from the traditional trade.  Despite the pitfalls, other chains are experimenting with smaller formats.  Trent, a retail joint-venture between Tata Sons and Tesco, reckons there might be mileage in limited-range supermarkets of 450-750 square meters, as well as smaller convenience stores.