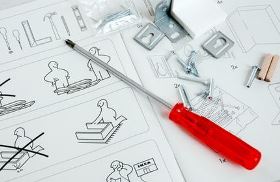 The “IKEA effect” calls to mind something we call deal momentum, which is the tendency for investors to fall in love with an idea simply because they spend so much time working on it.  This tendency is a cousin of commitment bias, and together they often dangerously combine to make investors “Defenders of Ideas” rather than critical and continual assessors of the ongoing attractiveness of an investment.

Have you ever spent a couple of hours working on a craft project — or a presentation for work — and then fallen in love with what you’ve accomplished?  Do the colors you’ve picked for your PowerPoint background pop so beautifully that you just have to sit back and admire your own genius?  If so, get in line: You’re the latest person to fall victim to the Ikea Effect.

The name for this psychological phenomenon derives from the love millions of Americans display toward their self-assembled furniture (or, dare we say it, their badly self-assembled furniture) from the do-it-yourself store with the Scandinavian name.  “Imagine that, you know, you built a table,” said Daniel Mochon, a Tulane University marketing professor, who has studied the phenomenon.  “Maybe it came out a little bit crooked.  Probably your wife or your neighbor would see it for what it is, you know?  A shoddy piece of workmanship.  But to you that table might seem really great, because you’re the one who created it.  It’s the fruit of your labor.  And that is really the idea behind the Ikea Effect.”

…people attach greater value to things they built than if the very same product was built by someone else.  And in new experiments published recently, they’ve discovered why it happens: Building your own stuff boosts your feelings of pride and competence, and also signals to others that you are competent.

Click here for more from NPR.org
Back to C&B Notes