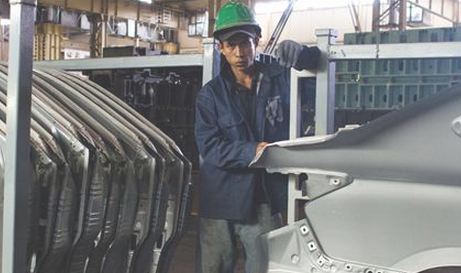 As we noted this summer, the “Made in Mexico” trend continues to re-emerge thanks to productive, low-cost labor that is benefiting from rising wages in the East and access to cheap shale gas.

Mexico is taking center-stage in the production of cars, where lower costs and skilled workers are reordering the global auto market.  Six years ago, Mexico was the world’s ninth largest exporter of cars.  Today the country is ranked fourth — behind Germany, Japan and South Korea — with exports expected to total more than 2.14 million vehicles this year.  One in 10 cars sold last year in the U.S. was made in Mexico.  Next year, every new taxi in New York’s fleet — made by Nissan Motor Co. — will carry the “Hecho en Mexico” label.  Mexico is now exporting vehicles to China, and even helped Japan keep up with orders after last year’s tsunami.

For decades, the free world drove cars made primarily in the U.S., Germany and Japan.  But a global shift toward smaller cars has put pressure on profit margins, forcing car companies to find lower-cost manufacturing elsewhere.  “Mexico is extremely competitive,” Carlos Ghosn, Nissan’s chief executive, said in an interview.  Plants in Mexico operate more hours a year than other Nissan facilities world-wide.  “You can run your plants with practically no limits if you want,” he said.  Also bolstering Mexico’s appeal, he said, are currency advantages and the high productivity of Mexican employees.

Labor was a smaller portion of the total cost of a vehicle when SUVs and light trucks soared in popularity.  But the financial crisis has spurred consumers to shop for smaller, cheaper cars — which have slimmer profit margins.  Also fueling demand for smaller cars was the decision by the Obama administration this year to nearly double new car mileage requirements, with targets of nearly 55 miles per gallon by 2025.  The new regulations will drive more orders for subcompact vehicles, said Guido Vildozo, an analyst at IHS Automotive, an industry research group.  “The first place that pops up is Mexico, because of labor.”