Forever a Country of the Future? 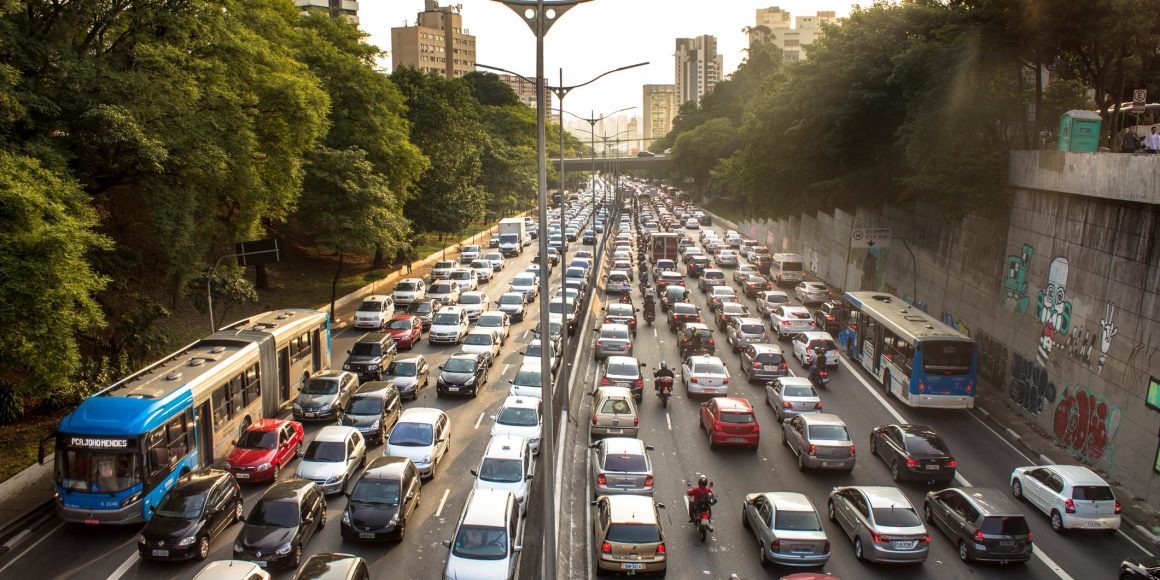 Brazil spends 2.5% of its GDP on infrastructure, less than 1/3 of what China deploys and 1/2 of what India outlays.  And Brazil’s government has done a generally poor job prioritizing that spending and driving projects to completion.  In the heart of Brazil, Highway BR-322 is a microcosm of the impact of poor infrastructure and the ripple effect it has on the country’s economy.

As Amaraldo “Formiga” Carvalho turns over the engine of his corn-laden Scania truck, the song “Despacito” (meaning “slowly” in Spanish) pours out of the radio.  Four days later, after a journey of nearly 1,000km on one of the most congested highways in Brazil, the song title will seem painfully prescient.  Such a trip shouldn’t take more than 14 hours by truck.   “This is the worst road I’ve ever travelled on — it’s incredible that a road like this transports such a big part of Brazil’s economy,” says Carvalho, peering past the transparent sticker of Jesus Christ plastered to his windscreen.  He’s going to need more than skill and luck to negotiate the perils of the notoriously bad BR-163 highway…

It will also explain why a consortium of the world’s biggest grain-trading companies is willing to invest $4bn to build the Ferrogrão, the so-called “grain train”.  The 1,050-km, five-year construction project is in Brazil’s infrastructure concession plan and an auction to determine who will build it is expected this year.  Parts of the BR-163 are widely seen as emblematic of everything that is wrong with Brazil’s infrastructure.  Some sections are in such poor condition that the route is a slow, wasteful and cumbersome way to transport goods.  The Ferrogrão will run parallel to a section of the battered and ill-repaired highway, easing the strain on large sections of it.

Accidents, logistical ordeals and even financial losses are commonplace along an artery that carries a full 13 per cent of Brazil’s grain output. Gilson de Sousa, manager of the transport company that employs Carvalho, estimates that trucks lose a fifth of a tonne of grain on each trip. Before Castelo dos Sonhos, about 600km into our journey, we come across José Neto, a driver who is desperately using a makeshift bucket-and-rope shovel, as well as his own hands, to try to recover the two tonnes of corn that his lorry has just shed on the road.  Fellow drivers, including us, join in to help.  Neto points at the pothole that he blames for the spillage.  “That’s a crater, not a hole,” he complains bitterly.  Such losses are supposed to be covered by insurance but, says Carvalho, “the companies are always awkward when it comes to lost cargo”.

André Pessôa, president of Agroconsult, a Brazilian consultancy, estimates that the cost of transporting grain in Brazil is up to three times higher than in the U.S.  “Around the world, low value-added cargo such as grains, fertilizers and even fuels are transported mainly over long distances on railroads and waterways,” he says.  This exemplifies the so-called “Brazil cost”, a reference to the heavy bureaucracy, over-regulation and weak infrastructure that combine to pile on production costs.  The Ferrogrão will run from Sinop to Miritituba, from where barges will take the grain to bigger ports near Belém.   From here the cargo will be shipped to Rotterdam and Shanghai.

Guilherme Quintella is the chief executive of Estação da Luz Participações, a logistics infrastructure company that is part of the consortium of grain-trading groups that is bidding to build the Ferrogrão.  He says Brazil’s transport system is “unbalanced” because there is too big a focus on roads, and poor logistics wastes 5 per cent of the country’s GDP, or $100bn, a year.  “It’s crazy,” he says.

The country is one of the world’s biggest exporters of soya bean, coffee and sugar, as well as of meat and corn.  Quintella predicts there will be a food glut if the Ferrogrão is not built, because the amount that needs to be transported will only continue to grow.  Mato Grosso’s annual grain production, for example, is predicted to rise from 33m tonnes in 2015 to 52m in 2020.  Quintella estimates that the Ferrogrão could transport 87 per cent of Mato Grosso’s grain destined for northern Brazil, with the remainder going by road.  “The joke we make is that Brazil is the only country in the world that does the infrastructure and by the time it is finished it is already saturated,” says Bruno Serapião, president of Hidrovias do Brasil, which operates terminals in the port of Miritituba, where Carvalho’s corn is bound.  But “you will always have the BR-163”, he adds.  “Anywhere in the world where you have railroads near highways, they have to be complementary.  In 20 years, having the Ferrogrão [alongside the road] will make Brazil a much better country.”  Paulo Sousa, business unit leader of the grain and oilseed supply chain in Brazil for Cargill, the agricultural commodities group, says: “Unfortunately, the roads are not able to cover all the demand that exists, with public investments that are delayed by [over a decade].”  Meanwhile, the nation’s grain sector in particular struggles against an “urgent need of good flow” for its produce.  One of the bottlenecks in that flow is the lack of paved roads.  A 2016 study by Brazil’s National Transport Confederation (CNT) reported that only 12.3 per cent of Brazil’s road network was paved.  That equates to 25km of asphalted roads per 1,000 sq km, compared with 438km in the U.S., 359km in China and 54km in Russia.  A few years ago, a group of private companies offered to pay for the BR-163 to be paved but hit a series of regulatory obstacles. 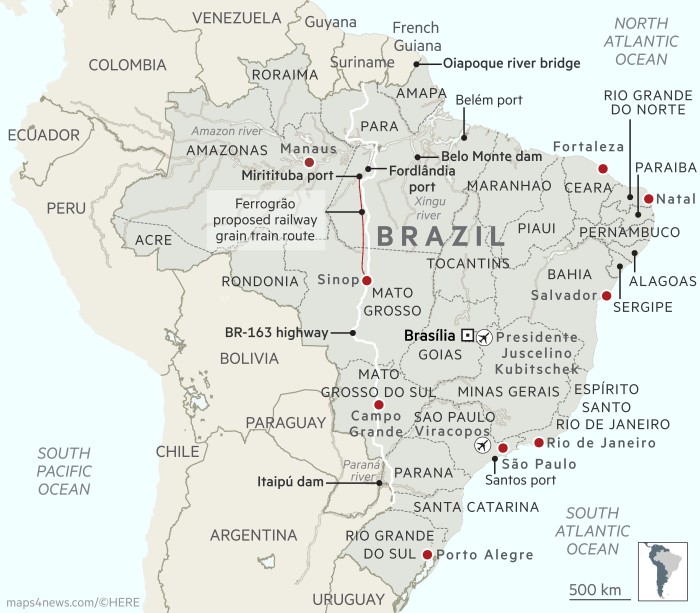 A front-seat dispatch from a grain truck on Brazil’s notorious BR-163 highwayFerrying freight from the centre-west to the northern ports is an arduous job. A promised new rail link is set to change that