Flipped Classroom: Out of the Lab 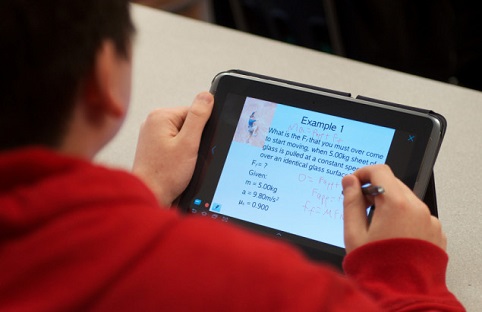 Clintondale High School, just outside of Detroit, is giving the flipped classroom idea a real-world test. In many instances, teachers at the school are recording their own lessons to broadcast to students. Ultimately, we suspect that best-in-breed content will provide scale to schools across the country/world, allowing teachers to instead focus their efforts on more detailed individual assessments and the creation of highly tailored, individualized learning plans for students.

JEFFREY BROWN: Just three years ago, almost half of Clintondale’s ninth graders were failing math, science and English, and overall school performance was ranked in the lowest 5 percent in Michigan.  Principal Greg Green decided to take a risk.

GREG GREEN, Clintondale High School: Frankly, we weren’t doing very well.  And so, you know, we had to make a change. I mean, we were — we were desperate for change.

JEFFREY BROWN: His aha moment came while coaching his 11-year-old son’s baseball team.  Having learned to record and post instructional videos for his players to watch outside of practice, he was struck by how much time was then left to focus on individual players on the field.  He saw the educational record starting with the power of videos.

GREG GREEN: Kids can go back and watch them as many times as they want.  And then me, as an instructor or expert, I don’t have to redo that all the time.  And I can spend my time with the students in class, in actually assisting them.  And so if I could do that with 11-year-olds, imagine what we could do with 15- or 16-year-olds doing math.

JEFFREY BROWN: Green went all in, flipping the entire school, urging his staff to rethink the use of technology and how it complements traditional teaching and getting local businesses to help fund the effort.

JEFFREY BROWN: The popularity of online learning has surged in recent years, and flipped classrooms have started popping up everywhere, from elementary schools to some of the nation’s top universities.  Clintondale is the first U.S. high school to do a total flip.  Harvard’s Justin Reich has been studying the trend and says he is cautiously optimistic.

JUSTIN REICH, Harvard University: What is exciting to me about the flipped classroom is that it gets teachers asking two really important fundamental questions.  What are the best ways for me to use my time, especially the very precious time I have in classrooms with my students, and then, what are the kinds of direct instruction that I could provide that could be digitized so people could watch it again?

JEFFREY BROWN: But Reich says that flipping alone isn’t enough.  As with any lesson plan, it all depends on exactly what’s being offered.

JUSTIN REICH: If what we see from the flipped classroom is that we take bad lectures and uninteresting worksheet problems that characterize a lot of the experience that students have in schools, and we simply flip the order of those two things, the odds that we see significant improvement in our schools is pretty low.

Click here for more from PBS
Back to C&B Notes