Explaining a Different Type of Inflation 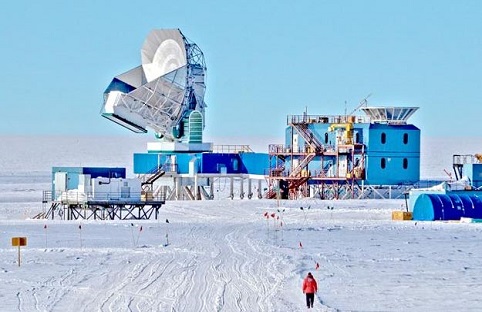 A team of scientists using a South Pole-based telescope revealed this week that they have detected the existence of primordial B-mode polarization.  The full significance of the finding is still to be determined, including whether the B-modes can even be observed again.  But, if true, one of the key implications would be the support it provides for cosmological inflation, which is the theory that the universe expanded exponentially during the Big Bang.

A team of scientists may have detected a twist in light from the early universe that could help explain how the universe began.  Such a finding has been compared in significance to the detection of the Higgs boson at the LHC in 2012.  What they detected is known as primordial B-mode polarization and is important for at least two reasons.  It would be the first detection of gravitational waves, which are predicted to exist under Einstein’s theory of relativity but have never before been seen.  But the thing that has scientists really excited is that it could provide the first direct evidence for a theorized event called inflation that caused the universe to exponentially grow just a fraction of a fraction of a second after it was born.

“Detecting this signal is one of the most important goals in cosmology today,” astronomer John Kovac of Harvard, who led the team announcing the discovery today, in a press release.  Though the team’s work will still need to be confirmed by other experiments, it is already generating a huge amount of interest.  It would give physicists a look at the hot and violent early universe, when temperatures were 13 orders of magnitude greater than what can be achieved at the LHC.  And it could help solve some lingering problems with our models of the Big Bang and the origins of the universe.

The early universe was extremely hot and dense.  But about 380,000 years after the Big Bang, it had cooled enough that light waves could travel without immediately crashing into one particle or another.  These photons have been traveling ever since, appearing in our telescopes as a faint radio signal called the Cosmic Microwave Background (CMB).  B-modes are sort of like a ripple that has been imprinted on these CMB photons.

Light, being a wave, oscillates in a particular direction, known as its polarization.  This polarization is given to each photon at the time it was created.  But gravity warps everything in the universe, including light.  As the CMB photons traveled through the universe past galaxies and stars, they were bent by the gravitational influence of these massive objects, and this bending produced one type of B-mode polarization.  Researchers using the South Pole Telescope might have discovered this first type of B-mode polarization last year.  But there is another, more subtle B-mode polarization that cosmologists have also long searched for.  In this case, the CMB light was swirled by enormous gravitational waves, which are ripples in the fabric of space-time.  The new findings suggest that these gravitational waves could have come from an extremely early period in the universe’s life known as inflation.